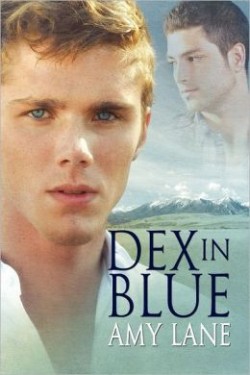 Dex in Blue
by Amy Lane

This is Amy Lane at her best! ~ Under the Covers

After reading Ethan in Gold, I decided I wanted more of the Johnnies so I went back to reread DEX IN BLUE. This is David’s book, who later takes on his one-time lover’s name as a way to remember and to remind him of where he came from.

Dex is probably my favourite character in the series. He’s the rock of the Johnnies family, the one who is always on the look out for the guys and who tries to make sure everyone is comfortable on set. There’s just this endearing quality that I think Amy Lane captures so well with his character. You can’t help but adore him.

In his story, you learn more about what makes Dex. Naturally, there is some angst but probably not as much as you think. Chase’s character still has his problems and like in real life, that affects everyone around him, including Dex and Kane.

There’s this one scene that I absolutely loved and it’s when Scott, Dex’s booty call boyfriend comes over to Dex’s house and tries to force himself in. All the while Kane is watching this as it unfolds and Dex is high off his ass and tossing CDs like their Frisbees, trying to decapitate Scott in the process. It’s wonderful, terrible and hilarious all at the same time. It’s scenes like this that Lane is often able to capture that makes a book. There can be angst, anger, lust and more, but when it comes down to it, Lane writes it in the most entertaining way possible, which is why it works so well for her books.

If you haven’t read Amy Lane or the Johnnies series yet, drop everything and run! It’s the perfect combination of sexy and sweet, angst and romance. Not to mention, all the characters are just a great group of guys you want to know more of. This is Amy Lane at her best!