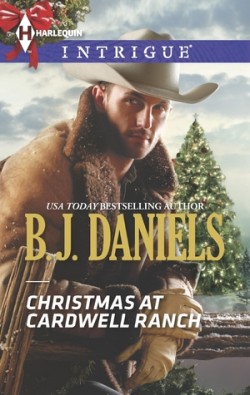 Lord, do I love picking up a B.J. Daniels book. I always know I am in for a good time. ~ Under the Covers

It’s beginning to look a lot like Christmas in Big Sky, Montana until murder happens and not just one but several. When Tag Cardwell returns to Montana after a long sojourn, he finds he isn’t exactly welcomed home by his father, but cousin Dana insists that he stay for a Cardwell Christmas. She wants family together. Trying to get things back to normal after an insane woman posing as her cousin wreaked havoc in her home.

Lily McCabe is filling in at her brother Ace McCabe’s bar for the holidays. The pretty young math genius enjoys her solitude though, especially after being jilted at the alter six months prior. When one of the waitresses winds up missing a whole lot of trouble starts to happen over a flash drive with gibberish on it that mysteriously winds up in Tag’s pocket. Is it gibberish or a mathematical code? When Tag and Lily find they may have to put their heads together to solve the mystery, a lot more may happen than finding answers. Maybe a little kissing under the mistletoe? When Lily’s proper ex-fiance appears on her doorstep she suddenly doesn’t know what direction to take her life. The safe and quiet one? Or the one that could lead to passion and excitement.

Marshall Hud Savage has been second guessing himself since he allowed imposter Camilla Northland, who posed as Dana’s long lost cousin, into his home to terrorize his family. How could he have let someone that unstable near his precious family? How could he have been so blind? These thoughts go through his mind constantly nowadays and he worries that his days as Marshall are numbered. Even though she is apparently tucked away in prison, Camilla Northland plots her revenge on Hud and Dana. Is her arm long enough to reach Cardwell Ranch?

It takes all of these people involved to try to solve the murder mystery plaguing Big Sky and the clock is ticking. The question is, can all be solved before time runs out?

Lord, do I love picking up a B.J. Daniels book. I always know I am in for a good time. B.J. gets the reader’s mind a flutter with all the facts and the possible resolutions. She is a master at telling more than one story at a time with incredible ease and sucking in the reader until the very end. It is so nice to be back in Big Sky, Montana and with the Cardwell Clan and its extended family especially at Christmas time. Watching the evolution of these awesome characters is always part of the charm mixed in with all the mystery and suspense. I loved B.J. Daniels’ CHRISTMAS AT CARDWELL RANCH and I know you will as well.

I was 8-years-old when I decided I was going to be a writer. I'd never met a writer, didn't have a clue how to become one. It took me years to find the courage to actually admit to anyone that my dream was to write. At 30, I quit a good job and found the only writing job I could find – a reporter at the local newspaper, part-time and at minimum wage.

I learned to write fast and on deadline at the newspaper, which gave me the courage to do what I wanted from day one: write fiction. I started small, writing short stories for Woman's World. Finally I wrote a book. After a couple of rewrites, I sold ODD MAN OUT to Harlequin Intrigue. After four books, I quit my newspaper job and began writing full time. When I started out, my only dream was that some day someone would read something I wrote. I had no idea all the wonderful adventures that would be ahead. I have since sold more than 40 short stories and 70 books, writing for both Harlequin Intrigue and HQN. I've won numerous awards and my books have appeared on The New York Times and USA Today Bestseller lists.

I feel blessed every day that my dream not only came true but that it was so much more wonderful than I could have imagined. I have made such wonderful friends along the way, both readers and authors and editors. I still get a thrill when I see one of my books on the shelf and I never take any of it for granted. I still attend writing classes to improve my craft and I work even harder to write books that I hope my readers will love.

When I'm not writing, I love to quilt, snowboard, waterski, boat, play tennis and, of course, read.