Hi Karina and welcome to Under the Covers.  I have to admit I may have a bit of a fangirl crush on you and devour pretty much everything you write!

And I use your “Under the Covers” coffee mug that you gave me at the NYC book signing every day!

*squee* *ehem* So we are very excited about the release of the much anticipated BOLD TRICKS.  But before we get to talking about the latest release lets back up for a bit.  How did The Artists Trilogy come to be?

I’ve had my own personal demons I had yet to face in my writing, so I thought I’d take the leap and twist my own personal experiences into a life far more exciting than mine. I’m a sucker for anything with a fast plot and hard characters and a tortured love affair (or two), so everything fell into place pretty fast.

What has been the hardest thing to write in the series?

For Sins & Needles, it was making myself face a lot of my own trials and tribulations through Ellie. Many scenes came from my own history. The end of On Every Street brought up every asshole who ever screwed me over. Ugh. In Shooting Scars, the reunion scene in the hotel room had my gut all twisted. I cried. Big time. And in Bold Tricks…I dunno, the whole thing? Your emotions get a fucking wallop in that one!

You’ve dabbled in a lot of different careers.  How did all of those help and influence your writing?

I think because I’ve lived different lives. As a travel writer, I opened myself up to the world, different cultures and lives. I’ve learned to open my eyes and take everything in and turn it to prose. It taught me true independence as well. With music writing, it also challenged me to report the world in a different way. With film, it taught me to be more visual and to realize how important pace and plotting is. All of my careers have helped me become the writer that I am.

You also have a screenwriting background and I for one would love to see the TAT series (as well as EIT!) on either a TV or movie screen.  Have you given that any thought?

Well it’s not like any author can just make a movie or TV series. You have to get a producer attached first. Then they take the reins and bring the rest of the pieces on board. Because I used to work in film I know how VERY rare it is for a project to go from optioned (ie, rights bought) to the final screen…very few make it. It would be lovely to see my works on TV or film, but I would never get my hopes up even if the rights were bought (and FYI the rights are available…it’s also a matter of anyone being interested – again, authors themselves can’t do much at all to get their work out there in that medium…unless they have a spare couple of million dollars lying around!).

If you had to cast Ellie, Camden and Javier, would you prefer them to be known or unknown actors?  Anyone in mind?

I think Kiera Knightly, Noomi Rapace or Rooney Mara could do Ellie justice. Javier would surely be Gael Garcia Bernal. I’d like to see an unknown play Camden.

Do you find that you included parts of yourself or people you know in your characters?

I know you probably can’t answer this but I’ll ask anyway.  Are you Team Camden or Team Javier? (And note that doesn’t mean that guy will necessary be the winner of Ellie’s heart)

Team Camden. I love the underdog. I love a man who loves, flat-out, no strings attached. Plus he’s still a bad-boy…tattoo artist, ex-money launderer, guitarist in a band and has a body built like a rock. What the hell is not to love about my soulful hero? He deserves infinite happy-ever-afters for all the shit he’s gone through.

I love Javier too. But he is the villain. I love him like I love Hannibal Lector and Darth Vader. Utterly intriguing but in many ways unredeemable.

What’s one of your favorite quotes from TAT?

In SHOOTING SCARS: “I was rage and I was wrath and I was twenty-six years of hell” – when Camden finally beats someone single-handedly…all those years of pent-up anger and injustice coming out. LOVED that scene. A big F YOU to the world and everyone who doubted Mr. McQueen.

Did you ever think the TAT series would have the impact and success it’s had so far?  Both in the self published and published world?

I hoped it would go far and I still think it has a lot farther to go – I could see a lot of different people loving this series and I hope I can reach a new market when it hits the shelves in book stores. The first series I wrote, Experiment in Terror, is horror romance, so while my fans for that series are very loyal, they are a small group. Unfortunately, no one reads paranormal book anymore. I hoped by writing something contemporary, with still suspense but without the paranormal, I could reach a larger audience and it has. It means a lot to me because TAT is a bit more personal than EIT is to me –in TAT I lay my soul bare for the world to see and I think that’s why it’s won over so many people. It’s gritty, edgy and real.

How did you celebrate when Forever Romance picked up the series?

What’s next for Karina Halle?

I’ve got the sequel to The Devil’s Metal – The Devil’s Reprise – coming out in October. I’m super excited about this…it’s sexy as sin and scary as hell! In December I have EIT #8, Ashes to Ashes, which I’m also biting at the bit to start writing. Somewhere along the line I hope to finish up my contemporary romantic comedy, Lost in Wanderlust. And then there’s next year which sees the start of two new series. Lots of good stuff!

Thank you so much for taking the time to chat with us and we wish you much success with BOLD TRICKS and anxiously await your next book. 🙂

With more lives at stake and games in motion, Ellie, Camden and Javier form an uneasy alliance that will take them from the treacherous streets of inner-city Mexico to the wilds of the Honduran jungles in order to find their freedom. But with liberty just on the horizon, the cost might come at their own redemption. 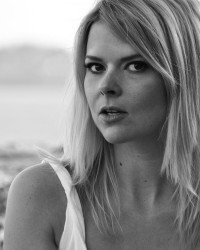 The daughter of a Norwegian Viking and a Finnish Moomin, Karina Halle grew up in Vancouver, Canada with trolls and eternal darkness on the brain. This soon turned into a love of all things that go bump in the night and a rather sadistic appreciation for freaking people out. Karina holds a screenwriting degree from Vancouver Film School and a Bachelor of Journalism from TRU. Her travel writing, music reviews/interviews and photography have appeared in publications such as Consequence of Sound, Mxdwn and GoNomad Travel Guides. She currently splits her time between her apartment in downtown Vancouver and her sailboat, where a book and a bottle of wine are always at hand. She is hard at work on her next novel.

I have yet to read this series, but I really want to! I am loving the sound of Camden! <3

My favorite thing about the The Artist Trilogy – that is too broad a question. However if push came to shove I would list the characters & plot as essentially tied for first place. The combination of the two is what really appeals to me. 🙂 Thanks for the great chance with this giveaway!

I haven’t read this series yet, I was waiting for Bold Tricks to be released before starting.

I haven’t read the series yet, but I think I’m going to love the plot and the exotic locations. [email protected]

really would love this book

I love this series, particularly the characters!! <3 <3
Thank you for the amazing giveaway! *crossing fingers*

What is not to love about this series! I am interested to see it come alive on the big screen 🙂

What I love about this series is the wonderful plot and character development, it keeps me wanting more! =D

I adore great characters and a strong plot.

I havent read it yet but I’ve heard great things!

The plot and the characters!! Very original.

I haven’t read any of them yet but I enjoy books with strong characters! Thanks for the giveaway!