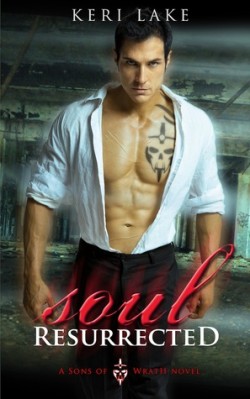 “As Cliche as it sounds, Soul Resurrected was a gripping read.  It “gripped” my full attention from the beginning until the end.  Ms. Lake has outdone herself making this series a solid addition to the Paranormal Romance Genre.” ~ Under the Cover

As Cliche as it sounds, Soul Resurrected was a gripping read. It “gripped” my full attention from the beginning until the end. Ms. Lake has outdone herself making this series a solid addition to the Paranormal Romance Genre.

Soul Resurrected is the second installment of Sons of Wrath series and it started shortly after the last book had ended. Ayden, Kayne and the Wrath brothers had stopped the Alexi and they are close to extinction. However, the aftermath of the chaos still lingers. Plenty of Alexis are still scattered about but the real threat lies in an even deadlier enemy. And this time, it’s Ayden helping the Sons of Wrath.

To be honest there were things about this world that I have forgotten. But Ms. Lake did a beautiful job with the recap and reintroducing the Sons of Wrath along with Ayden and Kane. She did a great job with the world building as well. I think I was drawn to that the most. She even had widened this world by adding more super naturals and a linear Demon world where Logan grew up in. I do have to warn readers of how graphic this novel is.  It can get pretty gruesome.

If you read the Soul Avenged, you know that Calla and Logan had a connection that was undeniable…emotionally and most definitely physically. Saving each other’s life can do that, no doubt. But that’s pretty much where there relationship kicks off. You would think they would start their relationship as easy as saving each other’s lives. Instead, they resented each other. Let me rephrase that Logan resented Calla. At first I just didn’t understand but in his defense there was a perfectly good reason for his annoyance. I almost didn’t like Logan because of his treatment of Calla. He was hurtful and demeaning and poor Calla, just took it all.

Calla was such a contradiction of vulnerability and kickass heroine. As an Alexi, she was well trained to hunt and fight but when others treated her bad. She simply just took it all in. I was sometimes frustrated with her. But then again I don’t blame her as she just wanted to fit it. Her past wasn’t the prettiest but when she started standing up for herself, she starting earning my respect. She certainly started getting it from Logan.

I enjoyed Calla and Logan’s story, they had a rough beginning but the end result was very romantic. I certainly want to see more of that from the rest of the brothers.

Speaking of which, there are more brothers that was added to the story. Ferno and Maddox are back and they are taking their place right beside the rest of the Wrath Brothers. Ferno in particular intrigues me. Something about his persona and powers that just grabs my attention. But not as much as Zeke. He certainly made his presence in the beginning of this book. Just like in Soul Avenged, Zeke is ever so flirty. I just love that words that came out of that mouth of his. Then Ms. Lakes takes him out of the picture leaving me wanting more. What a tease! I do love that she gave this novel multiple POVs letting the readers get to know the main characters. Gavin and Calix also made their presence but as far as I know Gavin’s story will be next.

I loved that I started reading this series from he very beginning. I feel like I’m witnessing the start of what I’m predicting to be an epic series. If you like a good PNR Read, Ms. lake will not disappoint you.