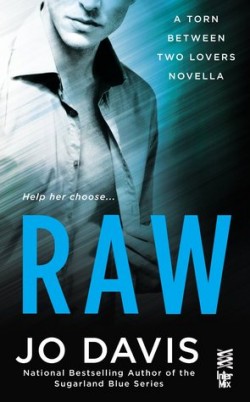 “Joe Davis’ Raw has a very intriguing story line complete with likable characters and steamy scenes.”  ~ Under the Covers

A very unconventional type of read, but this novella is not set in stone. Readers have a say on whom the heroine will end up with. It’s a new concept for me , but it definitely sound like fun. Joe Davis’ Raw has a very intriguing story line complete with likable characters and steamy scenes. But it’s not the best I’ve read from her. Don’t get me wrong, I enjoyed Raw except for a couple of aspects to the story fell short for me.

First, Sloane and Anna’s relationship was a bit too fast for my liking. Though I know this is a novella, sometimes, I just expect more when it comes to the ?love? part of the relationship. To me, it is more believable and easier to accept that they sleep together right away compared to insta-love feelings because their attraction is so strong. Sloane and Anna definitely had that. And that part, I enjoyed a lot. I have to give Ms. Davis credit; she did a good job with the sexual tension between her characters and the same goes to her steamy scenes. I thought Anna And Sloane were very hot together.

Second, because the series title promised ?two lovers?, I was expecting to get to know everyone in the love triangle. We did get to know Sloane and Anna , but we only get a glimpse of Joaquin towards the last part of the book, which didn’t say much about him. There was a snippet at the end, but I just skimmed through it. From what I read though, Joaquin looks like he will give Sloane a run for his money. Where, Sloane was hot and determined to get his job done, Anna was never his first priority. And again, from the beginning of the snippet, I’ve read, Sloane seemed like he knows exactly what he wants from the beginning. No doubts, no exceptions. Joaquin wants Anna. Of course, I can’t know for sure until book two comes out.

Luckily, readers do not have to wait as Risky will be out November 19th, 2013.

*ARC proved by publisher in exchange for an honest review