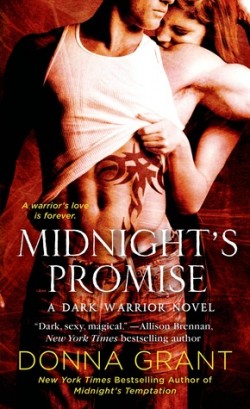 Donna Grant takes a different approach in the eighth book of the Dark Warriors series. Malcolm is a dark character, one who is angst ridden and burdened with this guilt that weighs him down. As he distances himself from the people who care about him, readers form an emotional attachment to this wounded warrior. It isn’t until he saves a woman from a car crash that he feels something stirring within him once again.

Evie is a descendant of druids so she has the ability to be the vessel in which magic and evil can be contained. As she enters the home of a key character in this series, the stones speak to her on a level that brings so much magic to this series. Trust becomes a big factor between Evie and Malcolm and yet, neither of them are willing to take that first leap of faith.

MIDNIGHT’S PROMISE has a slightly darker tone to it. It definitely has more angst. As Evie’s brother, Brian relies on her, readers get a sense of her frustration and pressing need to stop the danger from finding her. Malcolm must somehow open up his own hardened heart and let Evie in.

The beginning was a little slow for me. However, as more of the story unfolded, I realized it wasn’t necessarily about the action in this one. It’s more about the emotional journey for these two characters than the physical. I liked the route Grant took with this story. It definitely keeps things  interesting.