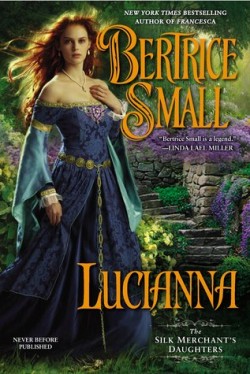 “Ms. Small just has a way of making you feel that you are part of the story and Renaissance Italy just came alive for me…” ~Under the Covers

I will start this review off by saying that I am a huge fan of Bertrice Small, albeit a recent one. I first read a Dangerous Love back in 2010 and have been stuck since. Bertrice’s books are memorable to say the least.

Orianna Pietro D’Angelo carefully plotted each of her daughter’s lives, especially their marriages. The wife a Milanese silk merchant only wanted the best of marriages for her beautiful offspring, but sometimes the meddlesome Orianna didn’t know what was best for her daughters. When Lucianna went easily into her marriage to wealthy bookseller, Alfredo Allibatore, she actually had it easy at first. Alfredo was old enough to be her grandfather and their relationship was more friendship and mutual respect than marriage. Lucianna emjoyed her work in her husband’s book shop and was content with her life even remaining untouched. After three years of marriage in name only, Alfredo passed away leaving nineteen year old Lucianna a wealthy widow and once again on the marriage market to fulfill Orianna’s whim.

Lucianna has no intention of marrying again. She did her duty by her parents and now she is in a position where she doesn’t need a husband. Enter Robert Minton, the Earl of Lisle, a handsome Englishman who is close confidant of the English King. Sparks fly when Minton meets Lucianna, but she is in complete denial.

When Orianna and her husband see the budding attraction, they send Lucianna to England as a representative of the silk merchants of Milan as a conspiracy to push Lucianna into marriage with the Earl.

Once in England, Lucianna must deal with the difference between both cultures, the Earl desperately wanting to be involved with the beauty when she is has no intention of falling into his arms and outside forces that would have Robert and Lucianna not be together.

Lucianna, by Bertrice Small is great read. It brought me back to my love for the author after I finished the Border Chronicles. Lucianna is the third book in the Silk Merchants Daughters series, but the first I delved into and once I finished Lucianna, I happily went back to the first two books, Bianca and Francesca. Ms. Small just has a way of making you feel that you are part of the story and Renaissance Italy just came alive for me, along with the restrictive attitudes towards women and the irony of it all. I recommend highly this series to lovers of historical romance and eagerly await the next in the series, Serena.

Bertrice Williams was born on December 9, 1937 in Manhattan, New York City, New York, USA, the daughter of Doris S. and David R. Williams, both broadcasters. She studied at Attended Western College for Women and Katharine Gibbs Secretarial School. On October 5, 1963, she married George Sumner Small, a photographer and designer with a History Major at Princeton. They had a son Thomas David. She has lived on eastern Long Island for over 30 years, and she loves it! Her greatest passions are her family; Finnegan and Sylvester, the family cats; Nicki, the elderly cockatiel who whistles the NY Mets charge call; her garden; her work, and just life in general.

Published since 1947, Bertrice Small is the author of over 50 romance novels. A New York Times bestselling author, she has also appeared on other best-seller lists including Publishers Weekly, USA Today, and the L.A. Times. She is the recipient of numerous awards including Career Achievement for Historical Romance; Best Historical Romance; Outstanding Historical Romance Series; Career Achievement for Historical Fantasy; a Golden Leaf from the New Jersey Romance Writers chapter of Romance Writers of America; an Author of the Year (2006) and Big Apple Award from the New York City Romance Writers chapter of RWA, and several Reviewers Choice awards from Romantic Times. She has a "Silver Pen" from Affair De Coeur, and an Honorable Mention from The West Coast Review of Books. In 2004 she was awarded a Lifetime Achievement Award by ROMANTIC TIMES magazine for her contributions to the Historical Romance genre. And in 2008 she was named by ROMANTIC TIMES along with her friends Jennifer Blake, Roberta Gellis and Janelle Taylor, a Pioneer of Romance.

Bertrice Small is a member of The Authors Guild, Romance Writers of America, PAN, and PASIC. She is also a member of RWA's Long Island chapter, L.I.R.W., and is its easternmost member on the North Fork of Eastern Long Island.