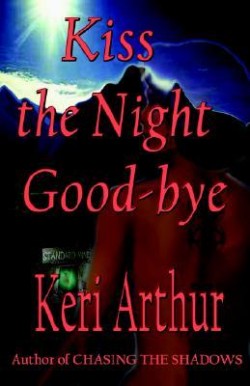 KISS THE NIGHT GOODBYE is an intensely thrilling and seductive story that really captured my attention from start to finish. It’s one of those novels that you can’t put down once you start. ~ Under the Covers

In the fourth and last book of the Nikki and Michael series, Keri Arthur spellbinds readers with her unique protagonists and intense plotting. If you’ve followed the series, then you will know that Nikki and Michael have come a long way from when they first met each other. Michael isn’t so stoic and detached and Nikki continues to grow stronger and stronger. Linked together in a magical way, the threat of danger becomes intensely deadly when Michael is kidnapped. It seems that his past has finally caught up with him.  In a sick and twisted game, mastered by the brother of the man Michael killed, Nikki is placed in a ghost town, lined with a magical barrier that prevents her from getting help.

As you can tell, KISS THE NIGHT GOODBYE is an intensely thrilling and seductive story that really captured my attention from start to finish. It’s one of those novels that you can’t put down once you start. Michael’s character continues to become fascinating to me and in this particular book, I found his sexiness to be amped up more. I didn’t realize he could get any sexier, but he does in this book.

Nikki is another reason I love this book. Her strength and her love for Michael shines through in all her actions. Despite wondering if the man in this ghost town really is the man she fell in love with, she actually never doubts herself or her love for Michael at any point in the book. If you’re a reader who enjoys Paranormal Romance and usually stray away from Urban Fantasy because there isn’t enough romance involved, then I think you’d enjoy this series because along with the fast-paced action scenes, there’s quite a lot of romance as well.

I said this once before, but I adore Arthur’s writing in this series. It’s so eloquent, so detailed, so spot-on in its pacing that it just makes the reading experience so much more enjoyable. It reminds me a little of Nalini Singh’s writing where the characters are lovable, but have a mysterious aura about them. The action scenes spare no emotions as they go from interesting to intense in just a few words.

What can I say? I adore this series and am a little bummed that this is the end, but I definitely know I’ll be returning to reread Nikki and Michael’s story again whenever I need an exciting read.

Thanks for the review. I’ll have to add this series to my TBR. 🙂

Under the Covers Book Blog
Admin
Reply to  Emilia