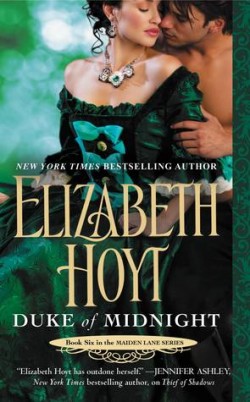 Duke of Midnight
by Elizabeth Hoyt

With much of the same intrigue, DUKE OF MIDNIGHT is a beacon that sheds light on an otherwise dark genre.~ Under the Covers

This time, Maximus Batten, brother of Hero, is the  man who roams the night, looking for the murderer of his parents. One night, he stumbles upon Artemis Greaves, a companion to Penelope. At this meeting his loses possession of his father’s ring, an aristocratic one that could very well reveal his identity if Artemis is smart enough. When he tries to get it back, he finds that the lady’s companion isn’t as plain as she pretends to be. In fact, Artemis is quite the fiery maiden.

DUKE OF MIDNIGHT is book six in the Maiden Lane series and it is the third of the books that follow the Ghost of St. Giles theme. I adore this storyline – I think it brings so much action, suspense and intrigue to the historical setting that just enlivens the entire book. However, I don’t know if this was my favourite of the three. Hoyt still has all the elements that can make this book a huge success, but something was missing for me a little bit here and even after some deliberation, I still haven’t found out what it is.

I enjoyed Artemis’s character. She was interesting and far more courageous than I initially placed her to be. Like Maximus, I thought she would be a little more timid and quiet, but when faced with danger, she actually faces it head-on and smiles. I really enjoyed that about her character.

Similarly, I loved Maximus as well! He is Hero’s brother whom we have read about before, but in this book, we gets some more details about their past and specifically, his take on the memories he witnessed that night when his parents were murdered.

In a few of the historical romances I’ve been reading, I noticed that more and more of the heroines are taking on a deceitful (I use that term loosely) and more mischievous personality. Artemis blackmails Maximus into helping her free her brother or she will expose him as the Ghost. It’s brilliant, really and am liking this trend in the genre.

If you have enjoyed the rest of the series, then rest assured that this book will be enjoyable for you. With much of the same intrigue, DUKE OF MIDNIGHT is a beacon that sheds light on an otherwise dark genre.

Awesome! I can’t wait to read it!

I love this series. I have started rereading Wicked Intentions and will continue to read the rest (except for Silence’s book-didn’t care for it). So I can be ready to pick up Duke of Midnight. Hope she continues to keep writing this series. Can’t wait to read it.

Yesterday, by chance on goodreads I ran into a trilogy Princes Trilogy from Elizabeth Hoyt,the ratings are very,very good,and know after reading this review definitely I want to read some book from Elizabeth Hoyt 🙂
It’s been awhile since I read historical romance :/
On this blog I found amazing recommendation of books,thanks!:)

Thanks for the great review Ann 🙂