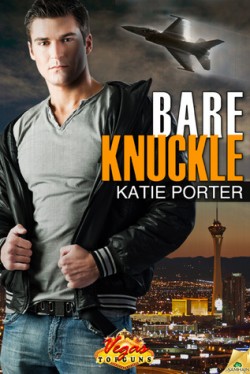 “BARE KNUCKLE will sizzle the panties right off of you!”
~ Under the Covers

“Turn the viewfinder to me. I want to see the moment I swallow your come.”

Eric is just a bit uptight in this. He has recovered from his accident but he has a lot of hang ups. He has his scars and women are not flocking to him the way they used to before. His brother is in rehab and he’s back to moonlighting as a fighter to make extra money to pay for that. He immediately catches the attention of Trish, who is starting out as a ring girl. Trish has her own issues, coming from a broken family where her mother has always used her. She’s trying to make it in Vegas but after so many years, it’s not working out for her.

I really liked his intensity and all his leashed issues. He has such a good heart and at times doesn’t know how to handle those feelings and prefers to keep them bottled up. Trish on the other hand I wasn’t too sold on and I think my few issues with her were the reason why this wasn’t a 5 star read for me. She’s a bit too materialistic and self centered. I just didn’t agree with a lot of her reasoning. And there’s the fact that she threw in her ex-girlfriend in for a threesome that was really all about her. I wanted to see more of her taking care of Eric and including him, letting him in.

Still as hot as I’ve always expected from this series, BARE KNUCKLE will sizzle the panties right off of you!