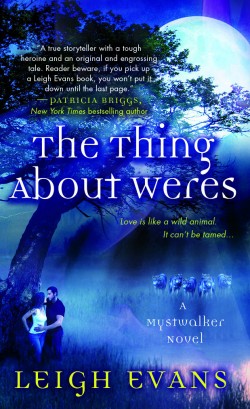 The Thing About Weres
by Leigh Evans

“WERES is a page-turner, and Evans keeps the surprises coming and coming, leaving the reader wanting more and more.” ~Under the Covers

This review contains spoilers about events that took place in
THE TROUBLE WITH FATE (Mystwalker #1).

THE THING ABOUT WERES is the second installment in Leigh Evans’ Mystwalker series, and just like the first, Evans delivers a fantastical read in a fabulous urban fantasy series.

WERES picks up six months after FATE’s cliffhanger ending for which urban fantasy novels seem to be known, and we find Hedi trying to keep her head above water as she struggles to figure out how to bring her Robbie Trowbridge back from Merenwyn. Now that she is Robbie’s mate, and since he is gone, being in charge of the Creemore pack has been bestowed upon her. Unfortunately, she is barely holding it together. She struggles with how to lead the pack, and basically does only what is necessary, often deferring to her right-hand pack mates, Cordelia, Biggs, and Harry, for their assistance. In addition, she rarely sleeps. When she does, she lands in dreams with Trowbridge that never end well, or she is thrown into Threall with the wizard and mad-one. Her inner were and her inner fae are in a constant tug of war, always fighting for dominance, but Hedi still hasn’t figured how to control them as she wishes.

On top of it all, the pack is going to be visited by the Council of the North American Weres (NAW), an organization that is likely investigating the events that took place at the end of FATE, which culminated in werewolf deaths and an Alpha who hasn’t been seen since. To say that Hedi is barely hanging in there would be an understatement.

Just as a representative of the NAW appears, and the most of the pack idly stands by while Hedi is more or less offered as a sacrificial lamb, more action kicks in, leading to two grand surprises. One is related to her past, and the other is related to her present. Hedi is uncertain, though, how either will play out in her future.

As with her first novel, Evans has penned a fabulous story in this creative and extremely well written series. The world building of the fae world is sometimes complex but constantly intriguing. We learn so much about fae history, and that of the mages and the mystwalkers. At times, it can be confusing, but Evans does well with flushing out the issues, making them more understandable as the story continues to unfold. Then there is the pack. Oh, there are times I wanted Hedi to blast some of the pack members back to last week, but she stays strong and surprisingly mature about the ugly politics that surround the pack. I just love how Evans has built this fantasy world that interweaves these two very different groups of fae and werewolves. I look forward to reading about both in more detail in future books.

As a main character, Hedi is not like most heroines found in urban fantasy novels. She is not kickass. She is not badass. She is young and has been thrown into a situation she never expected. She is special in that she has both were and fae blood coursing through her veins, but having lived a life mostly in hiding, she hasn’t had time to hone in on her gifts and learn how to control them with great adeptness. Still she continues to try. And it is that inner strength and will that carry her through some difficult decisions and tumultuous times. It is due to these traits, and how she is different from so many other heroines, that I really like Hedi. While I don’t think she really gets whiny, she often looks upon so much with a dismal resolve, however. Can I blame her? Not one bit. I do hope, however, that she becomes more confident as the series progresses. Her character needs to grow in self-assurance, which should come with time and experience.

One of the things that I was worried about going into WERES is whether we would get to see Trowbridge at all, or rather, enough. I am happy to say that we do. He is definitely coming into his own as an Alpha, and while there were moments that I wanted to reach into the book and slap him for things he said, or didn’t say, he certainly redeems himself, and I am really enjoying watching him grow as a leader and a mate. Being a sexy beast doesn’t hurt either. 😉

Overall, WERES is an excellent read, and this is a series I highly recommend. Evans pens her story with amazing imagery and excellent aptitude. She has created a fantastical story of weres and fae in which I love to get lost. Hedi and Trowbridge are not similar to most heroines and heros, and for that, I commend her creativity and style because who they are works especially well for the storyline. WERES is a page-turner, and Evans keeps the surprises coming and coming, leaving the reader wanting more and more.

I was born in Montreal, Quebec but now live in Southern Ontario with my husband. I’ve raised two kids, mothered three dogs, and herded a few cats. Other than that, my life was fairly routine until I hit the age of 50. Some women get tattoos. I decided to write a book. A little tardy, but then again, Mum always said I was a late bloomer.

Thanks for the recommendation and review Leigh 🙂