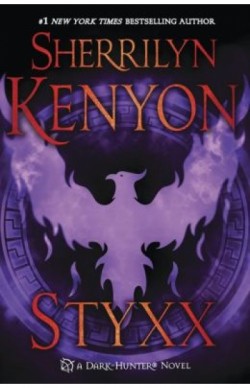 “Only an amazingly talented author can pull off an EPIC read such as this. Her talent of creating tortured heroes goes beyond any other authors I know. She has proven this novel after novel and Styxx tops it all. Yes, it is better than ACHERON.  And yes, it is THE best of the Dark Hunter series. In fact, it is THE BEST of the PNR genre!!!” ~Under the Covers

There just not enough stars to rate this book. 5+++

Only an amazingly talented author can pull off an EPIC read such as this. Her talent of creating tortured heroes goes beyond any other authors I know. She has proven this novel after novel and Styxx tops it all. Yes, it is better than ACHERON.  And yes, it is THE best of the Dark Hunter series. In fact, it is THE BEST of the PNR genre!!!

For the two days that I read this book, I did nothing but sobbed and ugly cried over Styxx’s story. I knew Kenyon will somehow open the reader’s eyes to a whole new perspective on his character, but I never expected for Styxx to outshine Acheron in every way. Seeing the story in Styxx’s point of view just left me in utter shock. I don’t want to give anything away but know that Styxx had it worse in every possible way. But he rose above it all and still managed to love. He did not do things out of spite nor did he retaliate against the ones he loved…Yes, I would say he is the better man.

The love story was also amazing. One thing I love about PNR novels is the eternal love. On this, I will be brief because there’s just no way I can explain this without any spoilers. I will tell you that Styxx will prove his love for Bethany is eternal. I know it sounds sooo cliché, but it is incredibly romantic. If anybody deserves this happy ending, it’s Styxx.

I was very impressed with the timeline of this book and connections to Acheron’s, Nick, Talon and the rest of the Dark Hunters stories. Each scene reminded me of which books they came from. The twists and turns of the stories just left me reeling (in a good way).  And I can’t help but to feel happy seeing the heroes I’ve fallen for. But still, none of them can ever beat Styxx.

I would like to put out a warning that STYXX is not for the faint of heart. It is heavy on sexual, physical and most of all emotional abuse. It really is very violent. But know that the abuse is not what this book is about.  Many have said how tortured Styxx was and how they cried all day and night but it is not about that.  It is about the survival of this victim that makes it so heartwarming.  Readers not only fall in love, they will feel empowered.

Forgive me if this offends anyone, but I thought it was important to mention this. Though this novel is fiction, there is so much to Acheron and Styxx lives that still exist even in our time. Their abuse happens in real life every day. Ms. Kenyon says she simply wrote this for the “character” itself, and no lesson was intended. Even if it wasn’t her intention, I hope that it still sends out the message. The best way to explain is through the writer herself. Ms. Kenyon had posted a heartfelt message that I think must be read by anyone who reads this book.

I have nothing but adoration for her talent and bravery in succeeding in life despite her past. Bravo Ms. Kenyon for rising up to the top.

*Review copy provided by publisher in exchange for an honest review

Wonderful review!!! I totally and wholly agree, Kudos to Ms. Kenyon!! Good job with the warning 🙂

Thanks Loupe!! much appreciated. ~Ang

WOW!! This review makes me even more excited te get my copy!!

Under the Covers Book Blog
Admin
Reply to  Marka

Really? The best in PNR. Better than BDB. I dunno about that. LOL! Just messing with you. Your review makes me really, like for real this time, start this series.

Under the Covers Book Blog
Admin
Reply to  Debbie

Deb, actually yeah. especially after Lover at Last? I would say yeah. I have no doubt Ward will win me right back with The King. ~Ang

Fantastic review, Angela!!
I Pre-ordered my copy, but need to read the previous 2 books before I read this one. I’m funny like that, in I have to read the series in order. Lol.
I guess I better hurry and catch up?!
Thank you so much for sharing your thoughts.
This series is what got me hooked on PNR and I am happily surprised to hear you say it is her best! 😀

Under the Covers Book Blog
Admin
Reply to  Tina B

Hey Tina, I’m the same way with the order of books. I have a hard time not following them. I’m sure you will love STYXX. ~Angela

Absolutely fantastic review Angela! I tell anyone who will listen about the fabulousness that is SK’s Dark Hunter series , and I always preface it with…”it has my favorite book ever in it, ACHERON.” If STYXX can beat my most beloved book, I can’t wait to read it 🙂

Thanks for passing by and for your comment Alyssa!!!
I felt the same way about Ash but Styxx just swept me off my feet! Let me know how you like it. I have a feeling you’ll fall just as hard as I did. 😀 ~Angela

I too feel like this book was the best of her series. Great Review.

Under the Covers Book Blog
Admin
Reply to  Lynnette

Wonderful review and so very true.

Styxx is a extraordinary novel.

Under the Covers Book Blog
Admin
Reply to  Rys

Thanks Rys, I really do think so. ~Angela

I loved reading STYXX. I want to read it again. Now. I like to put some distance between readings, though, so I’m re-reading Talon’s book. I feel the same way about the abuse and violence. It’s a testament to Styxx’s character.

Under the Covers Book Blog
Admin
Reply to  Chris Alexander

Can’t wait to read this book,when I read Acheron my heart was cried for him 🙁
But my sister,like you Angela said that story of Styxx is even sadder,and also one of the best books ever! 🙂

Thanks Bube! Your sis is soo right! and you’re welcome! ~Angela

Best of 2013: Suzanne and Angela’s Picks | Under the Covers Book Blog