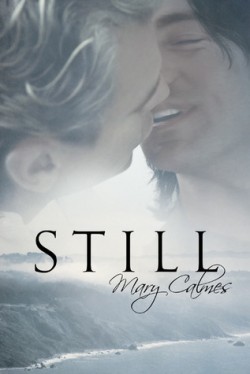 “It is a breath of fresh air in a genre that generally focuses on new love, and not on what happens after the HEA, as Calmes has done here. Siv and Walter truly are perfect together.” ~Under the Covers

STILL is an absolutely beautiful story that is not often told. It  takes place many years after the perfect HEA, where real life has  happened, the love has lost it’s spark and flamed out, but is
rekindled once again.

Back in 1996, display manager Sivan Cruz and lawyer Walter Wainwright  couldn’t seem to be any more different from each other if they tried.  Sivan is creative and care-free, and Walter is typical Type A and  uptight. For two years they had fussed with and yelled at each other;  then one day, all that tension came to head and ended in the form of  some serious page-burning, uber-hawt sex. We learn that Walter has  had his eye on Sivan for awhile, and he is quick to turn their newfound relationship into something more. Sivan is a bit more  hesitant, but willing to give it a shot. Then fate steps in, and the  rest, as they say, is history.

Fast forward 17 years, and we find that Sivan and Walter are no longer  working as a couple and plan to get divorced. Throughout the story, Calmes gives us glimpses of what happened to their relationship, and as probably is the case for so many people in the real world, life happened. Walter was previously married, with whom he had two children. At the onset of Walter and Sivan’s relationship, Walter’s ex-wife dies in an accident, leaving him to raise both kids. From that fateful day, Sivan never left. In fact, he became a father to both Declan and Chloe, and a house husband for Walter. All the while, Walter climbed the corporate ladder and became partner in his firm.
Doing that, Walter worked hard and long hours and wasn’t at home much. Sivan took care of things at the house, and he loved doing it, but something was missing. He didn’t feel the love any more, and at his suggestion, he and Walter separated.

God, I cannot even explain how this story resonated with me, so very much. Work happens; life happens; something has to give, and it’s usually the one thing people take most for granted ~ an established, comfortable relationship. It’s so easy to do. Walter was working long hours, and on top of that, his personality is not one that gushes or is lovey-dovey. But his working was his way of telling his family that he loves them and is going to take care of them, always. Unfortunately, that wasn’t communicated in words. After the kids were raised and off to college, Sivan put his all into becoming one of the city’s top set designers. They were living day to day, doing the best they could do to take care of their family, but they were neglecting the foundation upon which that family grew ~ their relationship and love for each other.

Calmes writes a beautiful story of Sivan and Walter living life after being separated, and shows how much these men still truly love each other, although each man thought that love from the other was dead. It wasn’t. It was buried deep. They both try dating other men, but somehow, they keep running into each other as their paths continually cross with each other. On top of that, their sexual chemistry never died, so the reader sees how they are are still drawn to the other, and beyond that, through their interactions, the love that these men DO have for each other really is evident. It just took this time apart for each of them to realize it.

I highly, highly recommend STILL. It is a breath of fresh air in a genre that generally focuses on new love, and not on what happens after the HEA, as Calmes has done here. Siv and Walter truly are perfect together. They complement each other in ways that only two people can do after sharing 17 years together. It just took them a little while to realize it themselves. In addition to these amazing men, they are surrounded by equally outstanding family ~ I just LOVE Chloe and Declan…I can only hope to raise such awesome kids ~ and friends. Calmes has outdone herself on writing such spectacular characters to tell a wonderful story. STILL is fabulous and heartfelt, and one that is definitely on my re-read list!

I love Mary Calmes’ writing and I look forward to reading this one.

You’re very welcome ladies!! Hope you enjoy it as much as I did! 🙂