Join our newsletter to be the first to hear our latest news! Learn More
Home / Reviews / Review: Master of the Abyss by Cherise Sinclair 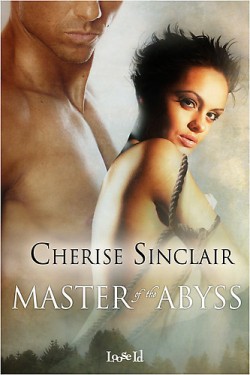 Master of the Abyss

Well-written with a stroke of passion in it, MASTER OF THE ABYSS truly felt like a love story that overcame its conflicts. ~ Under the Covers

Kallie Masterson is a tough chick, but she has a vulnerable core that she guards every day and night. It isn’t until the very end that you get her full blast of emotions, but that’s because Kallie is so damn good at hiding what she truly feels. She is a survivor. But when she crumbles, you see the dark spaces hidden within her soul before she picks herself back up.

But first, let’s backtrack a bit and talk about Jake Hunt. A sexy guy needs a sexy name, right? Jake is Logan’s brother. He is scarred and harboring his own dark feelings about his ex-slave, Mimi. Mimi was a woman who craved to be submissive 24/7. However, that didn’t fit Jake’s lifestyle. When he uncollared her, she grew distressed and killed herself. Jake holds himself responsible for her death and vows never to allow himself to feel something for another sub in case that another repeat happens. When Kallie and Jake meet, there is instant attraction, but both want to keep things as casual as they can. That is, until their passion overrides their restraint…

Similarly, Sinclair spends a lot of time at the very end of the book revealing Kallie’s conflicts and taking the time to show that she actually heals herself. No matter how brief the scenes were, they were necessary in closing out the book.

I really loved this book. Well-written with a stroke of passion in it, MASTER OF THE ABYSS truly felt like a love story that overcame its conflicts.

I love her writing too.

She is one of the best! If not THE BEST.

Under the Covers Book Blog
Admin
Reply to  Susan W.

Loved this book, love this series too!

Yes! I wish there were more books to gobble up!