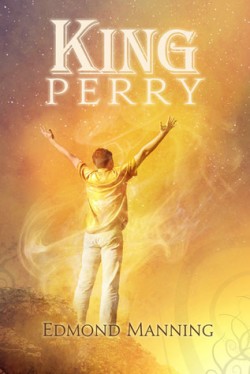 “KING PERRY incorporates the elements of adventure, humor, romance, and love, but what it really is a fictional novel that is a literary work of art.” ~Under the Covers

Aaahhhh, what a beautiful, meaningful phrase after reading such an amazing book.  What took me so long to pick up this fabulous novel, I have no idea.  But I am ever so glad that I finally did!  KING PERRY had been highly recommended to me by someone who is very stingy with her star ratings, but she gave it 5 stars, and now I know why.  To put it succinctly, it was brilliant.

KING PERRY tells the tale of Vin Vanbly, who meets Perry Mangrin, and decides that Perry needs to be “Kinged.”  What does that mean exactly?  It means going together on an adventurous weekend, doing fun, silly, and wildly unexpected things, all to serve a purpose in self-discovery, and for Perry, forgiveness.

Perry suffered incredible loss as a young child, and through a very brief meeting, natural instinct, and the ability to read people so, so well, Vin recognized this and saw something in Perry that could use one of Vin’s King weekends.  Perry, who barely knows Vin, is understandably suspect of the invitation he receives from Vin, but in the end, he decides to go along and see what it is that Vin is offering.  While Vin is not into BDSM, he requests Perry to submit to all of his requests.  Understandably, Perry responds to a lot of these with reluctance, but eventually he does submit, and the weekend quickly becomes one that he will never forget.  There is a wild trip to Alcatraz, a humbling breakfast, adventures involving a duckling (aptly named Mr. Quackers), fun on the beach, camping, and so many other things in between.

Manning weaves an amazing and simply beautiful tale of a grand King weekend for Vin and Perry, two characters who I just adore.  Vin is absolutely fabulous!!  He is not an alpha male, nor is he a huge, sexy hunk.  On the outside, he is an average guy.  The inside, though – just WOW!  Vin is one of the most beautiful characters I have ever had the pleasure of reading.  He is brilliantly witty, intelligent, and highly intuitive, all of which also reflects on Manning as the author.  Manning  doesn’t add detail to the story for the sake of filling a page, but at the same time, he writes about Vin’s quirky and humorous thought processes, things that are not often discussed in other books.  These are great glimpses into Vin’s beautiful, intricately thoughtful mind, and I find him so fascinating as a result.  As an aside, I also absolutely loved Vin’s OCD with words and letters.  I have a few of them myself, so I could completely relate.  🙂

Vin’s intuition is also spot-on.  He can see so much about people by reading into their responses and bodily reactions, no matter how subtle.  Because of all the greatness that Vin truly is, he is so adept at deciding exactly what needs to be done to King someone, and how to make that person whole once again – how he can be Found.  He also has a zest for life and living, kindness and caring.  To give you an idea, here Vin asks Perry:

“…have you ever done anything so significantly outrageous, so beautiful and insane, that on days when your life feels dull, these shining moments leap out?  Do you have an answer to the question ‘Did I live?  Did I touch the world?’”

Vin helps Perry do this – he helps him Remember the King.  In his adventures with Perry, we also get a glimpse into Vin’s background and an issue about which he prefers not to think.  KING PERRY only scratched the surface of that, but I look forward to reading more about Vin in future books to come, in hopes to see a transformation from Lost to Found himself.

Perry is a wonderful character as well.  He is understandably hesitant when he decides to accompany Vin on this King weekend, and while there are some men who would never go along with the things that Vin makes him do, he decides to do so.  He has his guard up, but underlying that is a vulnerability and a hurt so deep that as a reader, I just wanted to grab, hug, and squeeze him without letting go.  Nonetheless, he is full of compassion and kindness, traits that draw Vin right to him.  While not the focus of the book, Perry and Vin also share some great sexual chemistry and could seriously light some pages on fire with it.  Throughout so much of their intimate time together, Vin tells Perry tales of all various Kings, how some were Lost, how some were Found.  While a bit strange to discuss such things during such a time, it works and adds to the story as a whole. Perry and Vin are also very sweet and adorable together with their interactions and playful bantering.

If asked, I could not do justice to describe the type of book that KING PERRY actually is.  It’s not a romance in the traditional sense of the term.  There is romance, and there is love, but this is not a story about an HEA for these men.  That is not to say that there isn’t an HEA, because I really do believe there is.  Trust me – I cried big, full happy tears.  But it isn’t an HEA in the traditional sense.  KING PERRY incorporates the elements of adventure, humor, romance, and love, but what it really is a fictional novel that is a literary work of art.  Manning writes a most beautiful story, and I cannot recommend King Perry highly enough.

Guest Reviewer at Under the Covers Book Blog
I am a wife and mom of two sassy and fabulous kids, and I have decided I will be forever 39.After college, I became a paralegal and read only legal documents and eventually some baby naming books.Then about six years ago, I needed to check out all the hype of some teenage vampire romance, and that was all she wrote.It didn't take me long to rediscover my love of reading that I had throughout my youth, and I was devouring every paranormal romance and urban fantasy series I could get my grabby hands on.

Latest posts by Leigh (see all)

adding this one too! great great review Leigh

Thanks so much, Sharonda!! I hope you enjoy them as much as I did! 🙂

oh, and be sure to enter the giveaway to try and win King Perry! 🙂