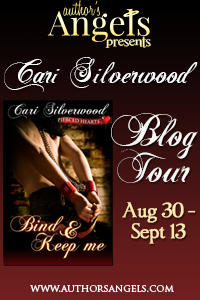 The writing of Bind and Keep Me was a whole new eye-opening experience for me. Though I’d read capture fantasies with dubious consent before (and those two are really closely interwoven) I’d never tried writing one. Take Me, Break Me was my first book that dabbled its toes in capture fantasy, but it barely got those toes wet. Some readers saw that story as consensual. My aim with this Pierced Hearts series has been to make the dubiousness ever more dubious with each book. I plan to do a minimum of three books so Book 3 is going to be a doozy if this one is anything to go by.

Anyway, as I wrote, I discovered things. Nasty delicious things to do with dubcon that you don’t get to reflect on until you have to delve into the guts of these stories. I did a lot of delving. Here are some of my personal discoveries.

The Sliding Scale of Meanness

Dubcon capture stories range from romantic bodice ripper style all the way to the woman being a slave in a dungeon where anything might happen, and it frequently can drift into some non-consent. To me, the big thing that stood out as different in these was the meanness of the man toward the woman. I’m not talking just the growly voice and maybe him saying things like, woman, your place is at the foot of my bed, kneeling.

No, not just that meltworthy type of declaration, because that sort of thing can still end up in love and romance. I’m talking truly mean where he will do whatever it takes to get the woman to be his, including totally ignoring anything that might otherwise be good for her.

One on the mean scale is him taking away her clothes just because he wants to. Ten on the mean scale is chaining her up in his spare room naked so he can share her with his friend, because that way she’s going to be more pliable to his will. Or I think that’s a ten? Maybe you have other ideas as to what a ten is? In dubcon, deep down inside her mind, the reader will see that she is aroused by what happens and still wants it to happen. In non-consent, she won’t be willing, even in her mind. That’s the distinction.

This is why dubious consent can only occur in fiction, but not in real life. Because in real life, if the man can’t tell for sure if she is consenting (because he isn’t in her mind), then it is legally rape. Which is why I like to stress, over and over, that we are in fictionland and fantasyland here.

The Perversion of the Black Moment

Discovery number two was that the black moment in a romance where hero and heroine are torn apart by something, where we are on our knees begging for them to get that HEA ending, is still there in dubcon. We are still on our knees wanting them back together…but she is desperately trying to get away from him. If you’re one of these readers, welcome to the Twisted Minds Club. 😉

I was so shocked when I truly saw the above for what it was. I mean, it is a little sick, yet so yummy!

In most of these dubcon stories, the man does not get identified as a Dom. Poor Klaus. I truly did badly by him. He lost his Dom card in Bind and Keep Me. But he had good reasons for what he did to her. At least he thought they were good reasons. I leave it to you to decide if he was right.

How far would you go to protect your love and your life?

When two deaths turn his world upside down, Klaus must wrestle with a problem that goes soul deep. With Jodie it was capture fantasy but now he’s made the fantasy real, dragging her along as his accomplice. No one should feel so good about something so wrong.

Maybe his soul is darker than he feared. Maybe the rules shouldn’t apply to him.

Contains spanking, bondage, caning, and piercing, and one alpha possessive man about to toss aside his morals and take what he wants.

Early praise for Bind and Keep Me:

“I’m not yours.” Her answer was quiet and tremulous.

Such bravery in the face of overwhelming superiority.

I stopped with my palm pressing her upper back down onto the mattress. Enough pressure that she could feel my strength, enough so that she tensed and then, as I didn’t relent, she gave in, her head lowering, her body quivering. Was she a true submissive? I was fairly certain she was.

She froze in the middle of inhaling. I smiled and grasped a big handful of those dark locks just above her nape. I levered her head back until she was arched and her breasts were no longer concealed beneath her. So I took one in the grip of my other hand. “Mine,” I whispered. “You’re mine whether you fucking want to be or not.”

I squeezed both her breast and the fistful of hair, and I leaned down to look into her fear-darkened eyes.

“You need to learn not to be afraid of pain,” I murmured. “And you know why?”
She swallowed and I felt her endeavor to shake her head. Long strands of her hair fell across her face.

“If you lose that fear of pain, you will lose some of your fear of me. Not all, some. I’m not your nemesis, girl, I’m just going to be your master.”

In the interests of not jerking most of my readers out of the story with some unfamiliar word usages, I opted to sometimes use the US word instead. However, since I completed the book, I’ve been told by many American readers that they’d rather I use the Aussie words.

I’m not entirely convinced. Since I think I have far more American fans than Australian, I may still be tempted in Book 3, “Make Me Yours, Forevermore”, to use some American terms. If you want to tell me otherwise, feel free to pop a comment on my facebook wall.

This example is why I hesitate:

Klaus put on his thongs and strolled out the door to take his daily walk on the beach.

US word vs Aussie

Cell phone = mobile   US term used in the story

Dishcloth = tea towel   I used the US word

Flip flops = thongs   This was explained in the story

Cooler = esky   US word used with the Australian word

Shrimp = prawn   This was explained in the story

Spatula = egg flip   This was explained in the story, and it’s a regional Australian term that isn’t used nationwide, I think

There may be others I substituted but missed seeing. I have become so used to doing this in my stories that it’s almost automatic. I have also used US spelling throughout. Though this book is self-published both of my earlier publishers, Loose Id and Lyrical Press, used US spelling.

Cari is giving away – Grand prize: A copy of Take Me, Break Me and a $20 gift card from Amazon

I love the Dom/Sub relationship as long as it stays to it’s true form, which is in actuality, the sub has the control. All it takes is that one word…their safe word and the Dom stops. It’s that trust that the sub will be pushed to their limit without using it…and the Dom will stop everything if the sub does.

The Dom-sub relationship and all trust that it involves between sexual partners.

My favorite part is the trust between the partners in the relationship. It has to be there in order for it to work..

The trust and depth of emotions is what appeals to me the most.

The relinquish of control.
Thanks for the giveaway.

I had fun writing this post, Timitra. The twisted psychology of these stories is what makes them so interesting to write.

I like my chocolate and my fiction dark and Cari Silverwood’s Bind and Keep Me looks as delicious as the finest dark chocolate. I can’t wait to devour it. The small taste you gave was not enough. Thanks for the giveaway.

Loved the first one– can’t wait to see where this one goes!

I haven’t read any of Cari’s work but would love to check her out with this book.

Great giveaway. Look like I’ll have to check out Cari’s books since they look interesting.

Uuh yeah egg flip is definitely regional because I’ve never heard it used (and I’m in Sydney!). I’ve always used spatula. Ooh and I heard somewhere that a lot of other countries don’t use the word Uni which just seems so odd.
Thanks for the giveaway!