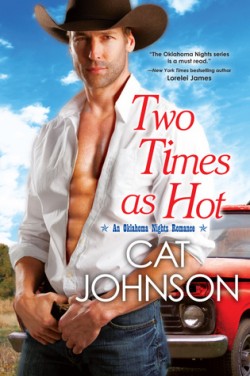 “…the reader is in for a wild ride filled with seriously hot sex scenes mixed into this gripping story.” ~Under the Covers

The second book in Cat Johnson’s Oklahoma Nights series, Two Times as Hot packs a punch for the petite teller of awesome tales.

It’s wedding time for Becca Hart and Tucker Jenkins, which means all sorts of people who normally would be kept apart by the day to day, come together to party. Lieutenant Colonel Logan Hunt was intent on remaining the career military man but when he sets his eyes on his best friend’s hot little future sister-in-law, sanity goes out the window. When he spies Emma Hart in the company of Bull Rider, Jace Mills, he gets a tinge of jealousy and he doesn’t even know her yet.

Having been robbed of a hot night with a cowboy, Emma Hart returns to Oklahoma, the scene of the crime, still the deprived woman. When Jace appears to be apologetic about their last ill-fated encounter, Emma decides to give him another chance until he totally messes up again. Enter wickedly handsome Logan to take up where Jace missed out, but things are different with Logan and Emma. They have a true liking for one another, mutual respect and admiration, but they still both only want a good time. Hmmm, but can Emma go back to her old life and can Logan return to his without the pair missing out on the best things that have ever happen to them?

In true Cat Johnson tradition, things become really complicated really fast and the reader is in for a wild ride filled with seriously hot sex scenes mixed into this gripping story. Once again I remained awake while the sunrise began to peek through my window and I finally read the last page. Nary a boring moment in Two Times as Hot by the indomitable Cat Johnson. This installment of the Oklahoma Nights series comes your way September 24th, but I suggest you get to pre-ordering it now. It’s one very awesome read and I know you will love it as much as I did.

Looking forward to this one. Thanks Kimberly!

Loved One Night With a Cowboy & I can’t wait to read this one! Thanks for the review!

I’m glad I pre-ordered a couple weeks back… Thanks for the great review.

First time heard about this author,but this book sounds interesting,got my attention 🙂

Thanks for the review and recommendation Kimberly 🙂