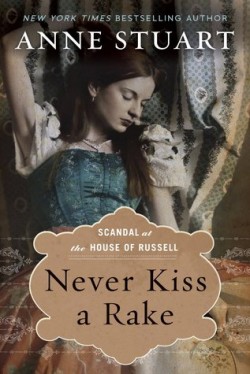 A wickedly sensual hero, a sensible practical heroine; I love that combination and Anne Stuart does it really well ~ Under the Covers

Miss Bryony Russell is determined to clear her disgraced father’s name and proof that his carriage accident was no accident at all but murder. Left with only a cryptic note from her father, she decides to infiltrate the house of his business partner, Adrian Bruton, Earl of Kilmartyn, the only person who wasn’t left penniless from her father’s supposed fraud. But posing as his housekeeper is harder than she expected, especially when she feels a helpless attraction and connection, one he seems to reciprocate.

A wickedly sensual hero, a sensible practical heroine; I love that combination and Anne Stuart does it really well, Adrian is naughty enough to ping on the bad boy radar, but with enough sweetness in him to get us girls melting at his beautiful feet. And Bryony was great in her practical glory, and watching helplessly throw sense out the window to fall in love with the wicked Earl was fun to read. But she did all this and more a lot better in her Wicked House of Rohan series,  that didn’t stop me from enjoying this book though; the characters were interesting, the sexual tension and connection between Adrian and Bryony was good and Never Kiss a Rake was definitely a page turner.

What has stopped me from giving this book a higher rating even though I did like the characters, story and the writing, is that I had a sense of deja vu whilst I was reading it. There are a lot of books like this one out there in historical romance and there was nothing about Never Kiss a Rake that stood out amoungst the crowd. Like I said above her Wicked House of Rohan series has the same kind of dynamic as this book, only I felt the characters and the romance had much more depth and feeling then this did.

Anne Stuart is a fantastic writer so although I have read better before that didn’t stop me from enjoying Never Kiss a Rake and it certainly won’t stop me from reading the next book in this series.