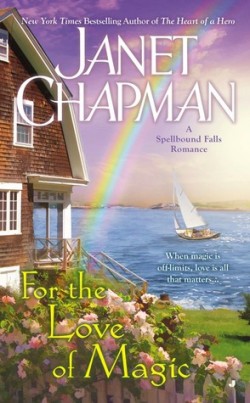 For the Love of Magic
by Janet Chapman

Rana Oceanus has left her husband, although she hasn’t gone far, and has purchased a house in Spellbound Falls near her children. Titus Oceanus has no idea why his beloved wife has left him. He knows she still loves him, but her every move bewilders him from her buying the crooked house on the coast of the Bottomless Sea to the sensual glances she sends his way. But he is determined to win her back, even if it could be the hardest and most important fight in Titus’s long and battle filled life.

This book is a little different than your usual romance, not only are the characters already married and already in love, they are also a little older than most couples. But, after having read most of the books in this series I am glad I get to read more about Rana and Titus. I wouldn’t recommend reading this if you haven’t read the previous titles in the series, all the names and lives of the different characters can get confusing, even for some one who has read them all.

But, although the outcome of this romance was a foregone conclusion I really enjoyed getting to know Rana and Titus better and seeing their passion and love for each other even after 40 years of marriage and 2 children. This book also set up a new Sheriff in town and I hope the ancient Laird, recently come to this century will soon be getting a book of his own.

However, although I did enjoy this book the gentle pace sometimes lacked excitement and I found some parts of it a little boring. But that won’t stop me from looking forward to the next book in the series and make plans to move to Maine, which is apparently where all these ancient gods and sexy ancient highlanders hang out!

This book is on my list to read. The hole series is good, and I’m glad your a fan