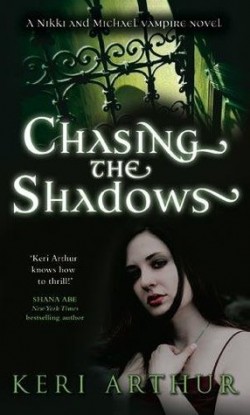 Chasing the Shadows
by Keri Arthur

I read this whole book in one afternoon and found myself riveted by the pulse-pounding action as well as the developing romance. ~ Under the Covers

CHASING THE SHADOWS is book 3 in the Nikki and Michael series. While I do believe you can happily read this book as a standalone, I would still definitely recommend reading the books in order just because you’ll get the full range of emotions in terms of the romance between our main characters. The story and the mystery itself can work alone, but if you are a Keri Arthur fan, I would suggest starting with book one.

In this book we get a deeper insight into Nikki and Michael’s relationship. They are a couple now but that doesn’t mean things are all swell between them. Both of them are fiercely independent people so part of the struggle with them is to find a balance. Mentioned in the book is the “give and take” of a relationship and that aptly describes what both of them need to do in order to make this relationship work. In this, this book reminds me a little of Cat and Bones of the Night Huntress series who have their own personal relationship problems within the series. I think having those struggles make Nikki and Michael a stronger couple and also, it makes them feel so much more real, as they undergo changes in their lives that find that happiness.

The case they are working on this time is probably my favorite in the series so far. Four wealthy women have been kidnapped by vampires. They have been mutilated and killed, even when the ransom money was paid. All this becomes clearer as the past of these women come into play. This mystery hooked into me skin and just dragged me through the whole story until I finished. I read this whole book in one afternoon and found myself riveted by the pulse-pounding action as well as the developing romance.

One other thing I absolutely loved about this series is Seline. Seline is a witch and we’ve seen her presence throughout the series, but I don’t think I’ve mentioned her before now. She has these mental conversations with Michael all the time and I always find myself looking forward to her scenes because she has known Michael the longest and I feel as if we get better insight into his character through her. She is also a compelling and interesting character herself so I like it whenever Michael calls her.

I loved this book! If you’re looking for a series that similar in style to Nalini Singh’s Psy-Changeling series with its writing and heroes, then you’ll love this. I would also recommend this book to fans of the In Death series by J.D. Robb because the mysteries are very well done and they have a paranormal twist to them usually.