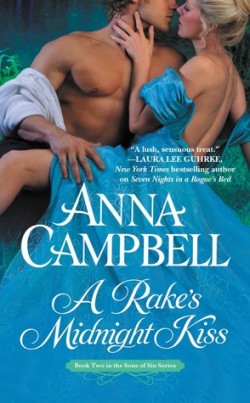 This was an enjoyable read, if not a particularly outstanding one ~ Under the Covers

Sir Richard Harmsworth has spent most his life hiding behind the facade of an uncaring rake with an impeccable fashion sense. But the not so secret whispers of him being a bastard and his mothers scandalous behaviour have a bigger impact on him than he would like. So much so that he’s determined to find and own the long lost family heir loom the Harmsworth Jewel and parade it in front of those who believe a bastard shouldn’t inherit. However, he never expected to find something he desired more than the jewel, but Genevieve Barrett the beautiful bookworm who owns the it seems to be just that.

After reading the first book in this series, Seven Nights in a Rogues Bed, I was expecting something a little different. The first book was sensuous and a little dark, where as this book had a completely different atmosphere to it. Although the main characters left sparks of attraction flying everywhere, it didn’t quite have the same sexual tension tautening the whole book like Seven Nights in a Rogues Bed did, it was much more light hearted.

However, I don’t think that the differences were a bad thing, I enjoyed listening to Genevieve and Richard’s verbal sparring as they both reluctantly fall in love with one another and I can’t deny that I was predisposed to like Genevieve for being a bookworm. And Richard, although he didn’t take my breath away he was a likable enough fellow. There was a little intrigue in this book, it wasn’t really needed as there was no mystery about who was behind it, but it did add a certain urgency to the romance and bring out Richard’s heroic tendencies.

This was an enjoyable read, if not a particularly outstanding one but a solid book in this series and I look forward to reading the next one, hopefully it will be about a certain very prim and proper Duke!

've always been a voracious reader! I write Regency historical romance for Grand Central Publishing and Avon.My latest release is A RAKE'S MIDNIGHT KISS from Grand Central, book 2 of the "Sons of Sin" series. My next "Sons of Sin" book is WHAT A DUKE DARES, out late August 2014.

And don't miss my short story "His Christmas Cinderella" in the Christmas anthology, A GROSVENOR SQUARE CHRISTMAS, which includes stories by me, Shana Galen, Kate Noble and Vanessa Kelly.

You can find excerpts, news and contests on my website at www.annacampbell.info

You can usually catch me hanging around with my bandita buddies on the Romance Bandits blog - www.romancebandits.com Pop by and say hello!