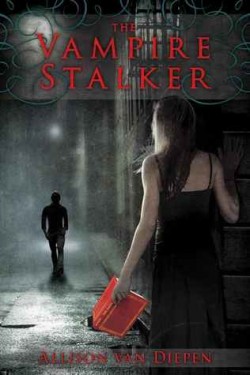 I felt that much more could have been made from the book. ~ Under the Covers

Amy is in love, shame it isn’t with a real guy, but rather with vamppire hunter Alexander Banks, a character in her favourite book series. Alexander is mysterious and broody; his mission in life to kill the vampire that terrorises his version of Chicago and who murdered his family. She never expects to actually meet him, but she can’t deny that the guy who saved her from being attacked looks and acts like the Alexander Banks from her favourite books, and if he has managed to come through, then maybe the deadly vampire he was chasing has come as well.

How could I resist a book, young adult or not, that involves book characters coming to life? Sexy book boyfriend characters as well, simply; I couldn’t. We all have our favourite heroes from the many many books and series we read and I know personally that if all my book boyfriends started popping into reality that I would need to get a much bigger house. So I knew I had to read the book where a beloved and smokin’ hot character came to our intrepid heroine’s rescue.

Although I have given this book a 2.5 rating, so it seems quite low, this wasn’t because I didn’t enjoy the book and it wasn’t because I found any of the characters annoying, the book was fun to read and I did find myself liking the Amy and Alexander. But, I felt that much more could have been made from the book, for example although I liked Alexander I didn’t know much about him, I don’t feel his character was particularly fleshed out. The romance was also as flat as a day old bottle of coke flat.

Alexander and Amy had no chemistry and intellectually I could see Amy being head over heels for him he was her vaulted Alexander Banks she loved him before he came into her life, but I never really felt much on Alexander’s side, there was never any big sparks flying moments between them. However, this was a light read that was fun, a little bit sweet and with an idea behind it that caught my imagination.

Allison van Diepen is the author of seven teen novels: Takedown, Street Pharm, Snitch, Raven, The Oracle of Dating, The Oracle Rebounds, and The Vampire Stalker. Her novels have been named ALA Quick Picks for Reluctant Readers and New York City Public Library Books for the Teen Age.

Her new book, ON THE EDGE, is coming in November 2014 from Harper Teen.