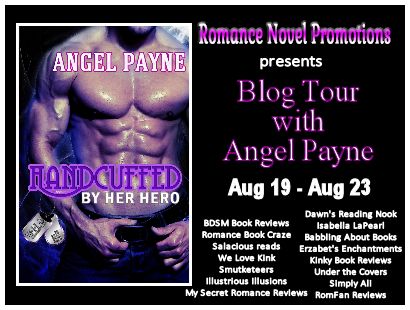 It’s so awesome to be back at UTC, for an opportunity to say HELLO to everyone! *Enthusiastic wave.* It’s been quite a “wild” ride since I was here last time—full of wonderful surprises. The most huge of those has been the overwhelming excitement about the W.I.L.D. Boys of Special Forces series.

And yep, you DID get that right…those initials are an acronym, and it stands for “Warriors Intense in Love & Domination.”  In answer to your question about THAT: yes, these heroes are take-no-prisoners style lovers, as determined to blow up the bedroom with the same intensity they blow up the enemy. Needless to say, I have had the BEST time channeling their passion, power, and incredible love stories to the page.

The second book in the series is newly released—and I hope you enjoy it! The story is about Sergeant Zeke Hayes and Rayna Chestain, who you all met in the series opener, “Saved By His Submissive.” Z and Rayna’s story is called “Handcuffed By Her Hero,” and here’s a little peek at the fun these two have together. If you like this, I hope you’ll check out the series—because the 3rd book will be out on Veterans Day! 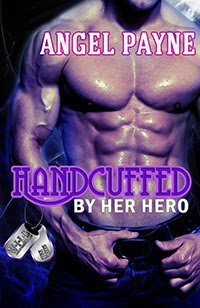 Z sucked in the cold with gratitude, dumping himself into a chair fitted in protective plastic for the winter. The covering was damp. It had rained earlier and he smelled more on the air. Thank Fuck for that. The scent was a blessed one-eighty from the spiced temptation of Rayna’s essence. He bent his head back, letting the drizzle drench his face, allowing his equilibrium to swim.

“What the hell are you doing? It’s freezing out here.”

Her voice didn’t stun him now. He would’ve been surprised, if not relieved, if she’d left now. That didn’t make the ache in her tone any easier to handle.

There was a rustle as she sighed. She’d probably folded her arms, getting all gorgeous and huffy on him. Fuck.

“I got the message the first time with the mighty whip stunt, okay? But somebody’s got to keep you from dying. Might as well be me.”

Incredulity prompted one of his eyes open. Oh, yeah. Huffy. Gorgeous. Damn her. “What the—”

“You’ve been sweating. In leather pants and nothing else. Now you’re sitting in midnight rain, shirtless and hatless, all but inviting hypothermia into your bloodstream for a nightcap.”

He stopped her by slamming a fist to the stone table. The glass stones in its fire pit jumped against the cover tarp from the impact. Both his eyes were open now. And shit, so were hers. Those deep green fantasies were even more exotic in her fury, especially when she parted her lips at him, too. He wanted to tame that mouth in at least fifty ways. He was hungry to bite it, growl orders against it, open it wide for the invasion of his. And that would be just the start.

“What?” she bore down by another step. “What would it be, Zeke?”

He dropped his head. Stared at his curled fists. How easy it would be to just open them up and reach for her. To tangle his fingers into her beautiful strawberry strands and drag her back inside by them. To lay her out on the bed and kiss her senseless while he cuffed her down, yanked those sweats off, freed his cock and—

With a guttural moan, he hit the table again.

“It would be what neither of us needs.”

Despite the dictate in his tone, Rayna didn’t budge. Hell. She wasn’t going to let up on this sheet check, was she?

Fine. He knew how to do this. He did it for a living, goddamnit. Inwardly, he streaked his face the color of the jungle and imagined his loaded gat in his arms with a shitload of hostiles on his ass. With that new fortitude, he lifted his face and drilled her with a steeled stare.

For a long second, she still didn’t move. For another, she shifted only those incredible lips of hers. Their hopeful defiance vanished, replaced by a bitter twist. They tightened as the depths of her eyes started to glisten silver, though the tears never liquefied. Without another word, she turned on him and disappeared inside the dungeon.

Zeke waited for the relief to come. It didn’t. He dropped his head back and peered into the thickening mist. “Thank you for coming, ladies and gentlemen,” he snarled. “That officially concludes the Zeke Hayes fuck-up-alooza for the night. Be sure to buy your T-shirt and keychain on the way out.”

A new flood of light from the building jerked him upright. Rayna appeared again, head aglow with a burnished halo, shoulders set, head high. She let the door close without giving him a passing glance. Instead, she fished her car keys from her purse.

He rose but she still didn’t look at him. Her only movement was a nod at the pavilion’s little side gate. “I assume this alley will get me back out to the street?”

“Good.” She paused long enough so he caught a glimpse of her profile—and the tiny wobble of her chin. “I don’t want to see…everyone again.” Even without her pause, he would’ve deciphered her subtext. Everyone meant Luna. “Tell Sage I’ll be in touch.”

He let out a frayed sigh. Pathetic. But it was either that or the command, right on the tip of his tongue, for her to stay. “Yeah,” he mumbled. “Will do.”

Between a rock and a hard place.

To Sergeant Zeke Hayes, the expression has always been a non-factor. There’s never been a situation he can’t blast, punch, or smart-ass his way out of, which makes him the perfect fit for his Special Forces battalion–and a natural-born Dominant who’s made a lot of submissives happy from Mt. Rainier to Vancouver.

That all changes when Rayna Chestain enters his world.

A rock.
From the moment Z snatches Rayna from the lair of a South Asian slave trafficker, his inner grizzly roars to life. This is a huge damn problem, because Z isn’t wired to be a one-woman man. Growing up an orphan on the streets of Seattle has taught him that beyond a few hours in a dungeon, trust means disappointment and love leads to agony. But here he is, in the remote wilderness escape he’d promised not to share with anyone, harboring Rayna from a fiend who now wants his pound of revenge flesh from her.

A hard place.
Sheltering Rayna? Z’s never done anything more right in his life. But wanting her? Dreaming of her beneath him, surrendering to his passion and domination? It’s the most forbidden fruit he can crave…and the only thing he can’t stop thinking about.

A new beginning?
This is a dead-end canyon that no rifle, bomb or sweet talk will let Zeke escape from. The only way out is to confront the reality of what Rayna has done to him…the mountain she’s moved in his intractable heart.

Angel is offering one prize of a $75 Gift Card to either Amazon or myhotshoes.com. The rafflecopter is below.

Wow!…. cannot wait to read this!

Thank you so much, Elizabeth! I hope you enjoy it. 🙂

ZEKE is so cool and I love his jokes. I LOVE your writing.

Ohhhh…THANK YOU, Michelle. It means the world to be able to connect with readers…my favorite part of the job…and hearing that stuff is so awesome. It makes the work worth it.

I am so excited to meet Zeke and Rayna! This is such a great series, thanks for the post!

And they’re excited to meet you too!! Hee hee. Thanks, Karen!

Loved Zeke….What a WILD ride err read. And Rayna, she finds her strength through him

I can not wait for this book. It’s moved to the very top of my TBR list.

I LOVED THIS BOOK! Zeke is so perfectly imperfect that you have to love him!! after you take a bat to his head though!!

Thank y’all for sharing! I adore Miss Angel and love me some Zeke!

Thanks for sharing Handcuffed by Her Hero and the giveaway. Sounds like a great book. evamillien at gmail dot com

Wow sounds great. I can’t wait to read this one.

This cover makes me drool every time I see it! I cannot wait to read this book! [email protected]

Love the cover and excerpt!

Can`t wait to read this !

The cover is sooooo sexy. And the book is interesting too.

That was an intense excerpt and I look forward to reading both books in the series. Congrats on the new release and thanks for the giveaway opportunity.

I can’t wait to read it.

Thanks for the awesome excerpt. Congrats on the new release. I look forward to learning more about Handcuffed by her Hero.
Mel

This is a fun tour! Love the bucket list!

Yay, another excerpt! Thanks 🙂

I am looking forward to this!