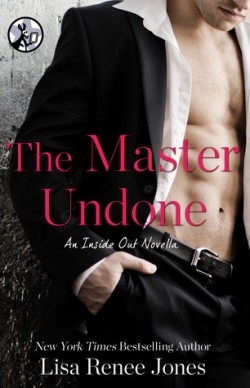 “…Ms. Jones managed to again, capture my attention and again, managed to leave me with my jaw dropped to the floor with a teaser ending. ” ~ Under the Covers

Ms. Jones fans’ have been asking and waiting for this novella to come out. Though it was too damn short for my liking, Ms. Jones managed to again, capture my attention and again, managed to leave me with my jaw dropped to the floor with a teaser ending.

We knew, Mark Compton was going to get his own novella, and was it everything I expected? Yes! Mark is as hot as we have seen him from the previous books.  However, this book differs as we get his darkest thoughts via his POV.  He recently had a loss and he feels guilty about it.

Along with that guilt, he just found out that his mom has cancer, poor guy.  We really get know him as all his feelings are laid out for us to see.  But this book is not about his loss but it’s about Mark finally finding someone who will meet his needs, someone to challenge him if you will.  I find it funny that Ms. Jones pairs him up with someone so much like him.

They both have very strong persona, aggressive and very controlling.  Unfortunately, their story does not end here.  There was a bit of a cliff hanger at the end. I found myself swiping the screen of my ereader(several times) making sure that ending was not a mistake.  Alas, it was not.  But the good thing is Revealing Us will be out in just a few weeks.  Not only that we get more of Mark, but we will definitely get more of Chris and Sara.

Did you like this review? If so, tell us your thoughts in the comments below!

Love the cover…book sounds good too!

Love this series! It was nice to see Mark’s vulnerable side for a change 🙂

Great review! I can’t wait to read more of Mark! Revealing Us is fabulous!!!

I love this series,is one of the best! 🙂
Can’t wait to read much,much more about Mark in his book 🙂
Yay!

ARC Review: My Hunger by Lisa Renee Jones | Under the Covers Book Blog

ARC Review: No In Between by Lisa Renee Jones | Under the Covers Book Blog

ARC Review: My Control by Lisa Renee Jones | Under the Covers Book Blog