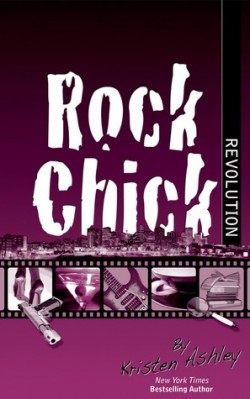 If you haven’t read this series, you need to start RIGHT NOW, they are full of laughs, full of heart and even better choc full of some sexy assed alpha males and some sassy females to keep them on their toes. ~ Under the Covers

The final tale in the series is about the last single gal within the Rock Chick, Ally Nightingale and a new(ish) addition to the Hot Bunch Lorenzo “Ren” Zano. Ally has finally found what she wants to do; sleuthing seems to run in the Nightingale blood and becoming a private detective like her brother Lee suits her perfectly. However, with two overprotective big brothers and a few bad guys gunning for her, not to mention a kind of boyfriend who doesn’t like the idea much, she may find it harder then she thinks.

It was was with a sense of both excitement and trepidation that I opened the last of the Rock Chick books, excitement as we finally get Ally’s book and trepidation as I DON’T WANT IT TO END!! What will I do without my regular dose of Rock Chicks and the Hot Bunch!? Why must all good things come to an end?

But come to end they have, and it was a spectacular way to go, leaving Ally’s book to the end was genius, we have all come to love her through the last 7 books and her independence and strong will make the last book explosive and emotional as we watch this fantastic series wind down. This book differs slightly from the others as Ren and Ally are sort of together at the beginning of the book and as you progress through we watch as they both come closer together as Ally opens herself up.

Ahhh, Ren…although not my favourite of the Hot Bunch, he is still a classic KA alpha male and I love every last one of them. Sexy, strong, kind but also in Ren’s case slightly more laid back than usual, he was perfect for Ally, stepping forward when she needed him, but also (after a few fights!) supporting her decisions, even when he didn’t like them. Together they were great and I

am glad the series has ended with a bang.

Like every book in this series, as well as the explosive passion you get from the main couple, you witness the friendships and love in the group, as well as a bit of action and crazy antics. What has made this one of my favourite series is the aforementioned friendships and connections, I love reading about the other girls in the group, seeing friendship given as much time and valued as much as romance is beautiful. Another thing that KA does really well is epilogues, and this one is no exception, it leaves you with a big smile on your face and may be a tear in the eye as you wave goodbye to your favourite characters, quietly hoping they make a cameo in future books and series by Ms Ashley!

If you haven’t read this series, you need to start RIGHT NOW, they are full of laughs, full of heart and even better choc full of some sexy assed alpha males and some sassy females to keep them on their toes.

Here is my final Hotness of the Hot Bunch scale!

Clue: Girls working here might be heavy on the makeup

For your next clue visit www.2geekgirlsreviewbooks.com

When you have all your clues for today, enter them here and you can win one of the prizes below https://sites.google.com/site/rockchickrevolutionroadtour/

Rock Chick Groupies (3rd – 5th place)
An e-copy of Rock Chick Revolution for you or a friend.

cant wait to start this series

I’ve got the first on my tbr…thanks for the great review Suz!