Join our newsletter to be the first to hear our latest news! Learn More
Home / Reviews / ARC Review: My Favorite Mistake by Chelsea M. Cameron 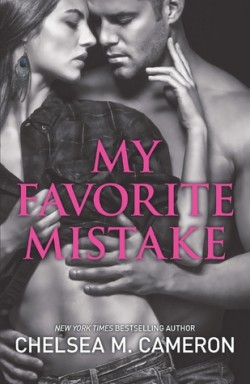 Perhaps the strongest aspect of this book is the dialogue. Cameron kills it with each returning, snarky line. ~ Under the Covers

This is my very first book by Cameron. I found out about her after reading an interview with Jessica Sorensen who said she enjoyed this NA title so I gave it a shot.

Right from the very beginning, I found myself very impressed by the author’s POV. It’s a great fit for NA and almost reminds me a little of J. Lynn’s writing style. So if you’re a fan of Lynn’s, then I’m sure you’ll find some of what you like in Cameron’s writing as well. I’ll go into this in detail later.

Perhaps the strongest aspect of this book is the dialogue. Cameron kills it with each returning, snarky line. It definitely brings life to the pages and I found this to be highly enjoyable to read.

I was a little skeptical about starting this book because some deemed the hero to be a douche. And not just any douche, but a complete asshat. It intrigued me then so I jumped in and found that yeah, though Hunter does and says things that is kinda douchey, he does it intentionally to piss Taylor off. I didn’t see it any different than what Julie James does in her Practice Makes Perfect book, where the hero and heroine go at it in a frantic race to make partners at the firm they both work at. Let’s be honest here – it’s entertaining to read about and Hunter only looks like a douche if Taylor can’t handle it and let’s just say that that punch and kick in the balls proves that Taylor can handle this all on her own.

After a great start, I found the middle and end to be a little wishy-washy. It’s much of the same in the dialogue department. There’s a lot of Hunter coming onto Taylor and her karate-chopping him away. I was intrigued by their pasts and why they were both have night terrors/nightmares. However, when the actual details of those secrets were revealed, I was a little disappointed in them and felt that it was resolved quite quickly. Another thing I didn’t really like was how one second Hunter or Taylor is having a dark meltdown but then a second later, they are back into that upbeat back-and-forth. I thought it kind of undermined what the author was trying to establish in the scene before by making readers sympathize with the characters.

As a result, I didn’t feel the weight of their problems as some others books have made me feel simply because the characters don’t feel so tortured about it a second later. In actuality, they seem perfectly fine.

That being said, this is where I think Cameron and J.Lynn’s writing style merge. Both authors have a great voice that really makes the narration pop, but in terms of the angst, it’s not too deep that you feel burdened by their problems.

One last thing…there were a couple of times when I noticed some changes in tenses. One minute it was past tense and then a few sentences later, the narration slipped into present. But since this is an arc copy, I tried to ignore those slip ups.

I enjoyed MY FAVORITE MISTAKE enough to check out another one of Cameron’s titles, THE DEEPER WE FALL.

I didn’t get the hype around this one either.

Under the Covers Book Blog
Admin
Reply to  Krista

It had a good start, just lost some of its steam towards the end.