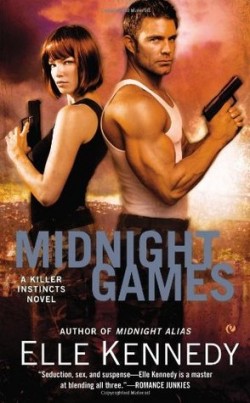 “In MIDNIGHT GAMES the risks and stakes are higher….I was kept on my toes the whole time.” ~Under the Covers

The Killer Instincts series has had my attention from the beginning because it’s not just about a group of badass military (or ex-military) men out to save the day.  There’s also a group of assassin women.  Nothing gets me more than a badass heroine and this series usually has that in spades.  Add to that the great suspense element, tightly written plot and one of my favorite cast of characters in the romantic suspense world right now and you have a winner.

We met Isabel Roma a while back and saw her first interactions with Trevor.  The attraction was there but the timing wasn’t right.  Trevor had lost his wife and was devastated.  In a very dark place and ready to give up on life.  Isabel was that light that dragged him through that time when they had to work together on a case.  Things got a bit more heated between them in the previous book when time had started the heal Trevor.

In MIDNIGHT GAMES the risks and stakes are higher.  Noelle’s team is called in to help find Jim and then bring down who they thought was a human trafficker.  They weren’t ready for the surprises and twists this story had prepared for them.  I know I wasn’t!  There were so many things I didn’t see coming.  Just when you think they will be safe everything goes to hell.  And just be prepared for some loses.  I was kept on my toes the whole time.

Isabel and Trevor were at a point in their relationship that they were ready to admit their feelings for each other.  The relationship development was just getting past those barriers they both built around their hearts and letting the other in emotionally.  I really enjoyed them as a couple in and out of the bedroom and the added bonus is they work great together!

Then there’s the side characters.  Without going into the guys….I’ll just say that I need to have Noelle’s book.  I wasn’t expecting what was going on with her, meaning who she’s having an affair with.  The bit of background info we got was just a teaser.  I know her story is going to be an intense roller coaster and I’m ready for it.

Isabel entered the bathroom and closed the door behind her.

He looked at her in surprise. “What are you doing?”

“Playing doctor. I’m getting pretty good at it.” She eyed him expectantly. “So, what needs to be cleaned up?”

Reluctance washed over him.

“It’s either me or Dr. Amaro. Take your pick, Trevor.”

The stubborn lift of her chin told him she meant business. With a sigh, he bunched up the collar of his shirt and yanked it over his head.

Isabel’s answering gasp made him smile. “It looks worse than it is,” he assured her. “Seriously, Iz.”

“Are you kidding me? You look like you fell into a pit of razor blades.”

The anger and concern flashing on her face brought a spark of warmth to his heart. He couldn’t remember the last time he’d had a woman worry about him. It felt . . . nice.

“Sit down.” She pointed to the closed toilet seat.

Her tone brooked absolutely no argument. He’d never heard that commanding voice leave her mouth. She was usually so easygoing, self-assured, speaking with quiet authority. But there seemed to be a crack in her composure, revealing a rawer, more emotional side to her. He’d noticed that same emotion swimming in her eyes at the rendezvous point when she’d thrown her arms around him without stopping to worry about propriety. At that moment, it was as if she’d forgotten she was trying to keep her distance from him.

Friends. Ha. He couldn’t believe she’d even suggested it. Didn’t she realize she made his body burn with her mere proximity?

When he looked at her, he didn’t see a friend. He saw a woman he desperately wanted to hold. To kiss.

Trevor dutifully sat down. A jolt of heat went through him when Isabel sank to her knees in front of him. Jesus. He hadn’t had sex in two years, and now that his body had decided to come alive again, it was doing it with a vengeance. His cock stiffened and strained against the crotch of his pants, but luckily Isabel’s gaze was focused solely on his chest.

“There are like a hundred pieces of glass lodged in your skin,” she murmured in distress. “How are you not in pain?”

“I’m a soldier. I’m good at blocking out pain.”

With the most gentle of touches, Isabel went at him with the tweezers. She picked out the tiny shards of glass, dropping each one into the wad of toilet paper in her hand. Silence settled over them as she worked, diligently tending to each cut and scrape. When she reached his left shoulder, she hissed out a breath.

“This is not a graze, Trevor.”

He glanced down and noticed that the bullet had taken a small chunk of skin with it, leaving the area raw and bloody.

“And let me guess—it doesn’t hurt either.”

Her sarcasm made him laugh, but the sound died in his throat when she dumped nearly half a bottle of rubbing alcohol directly on the wound. Without warning.

“Son of a bitch,” he ground out. His arm felt like it was on fire, and he bit down on his lip so hard he tasted blood in his mouth.

“Oh, did that hurt?” she asked sweetly.

He glowered at her. “That was evil.”

“That was aimed to teach you a lesson.”

“No, that you should tell people when you’re in pain!”

She looked so flustered he found himself leaning forward and touching her delicate jaw. When his hand made contact, she jumped, her eyes widening.

“Were you this angry at Ethan when he kept his bullet wound from you?” Trevor asked huskily.

“No, you weren’t.” He met her eyes in challenge. “You don’t like seeing me hurting.”

She visibly swallowed. “Of course I don’t. I don’t like seeing anyone hurting.”

“So I’m just like everyone else, huh? No more special than Ethan or D or some stranger you encounter on the street?”

He could feel her hand trembling as she wiped away the blood caked on his shoulder. “You’re purposely trying to get a rise out of me,” she said stiffly. “You’re my friend, okay? I don’t like seeing my friends in pain.”

“We’re back to that, huh? Isabel and Trevor, best friends forever.” He chuckled. “You really think we’re capable of being just friends?”

Keeping her eyes downcast, she ignored the jab and slapped a square bandage on his arm. 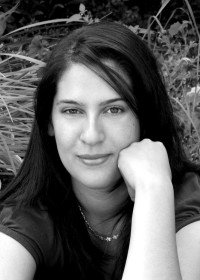 Thanks for the review – I have the first book in this series in print but haven’t had a chance to start it yet – I do plan to read the series though. Like that you added an excerpt at the end:)

Hope you enjoy it Maria! 🙂 And maybe the excerpt gives a glimpse into the author/series enough to entice.

The book sounds good and I loved the excerpt. Thanks for the review Francesca.

You’re welcome glad you enjoyed it!

Thanks for the review Francesca!