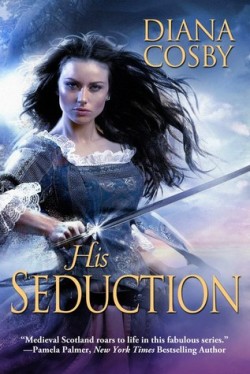 His Seduction
by Diana Cosby

“Griffin is the dream hero from the first page.” ~Under the Covers

When Scottish Lady Rois Drummond believes her father, The Earl of Brom is about to be accused of treason to the Englishman Sir Griffin Wescott she steps forward and accuses Griffin of compromising her to deflect from the politics. What Rois doesn’t think will happen ultimately happens when Griffin offers for her hand, knowing she is a liar and hoping she will speak the truth before the vows. Hmmmm and the plot thickens when Rois sticks her her lie and ends up Griffin’s wife.

Rois goes into the marriage believing the worst about her new English husband, but soon realizes that her preconceptions were wrong. Sir Griffin not only is an honorable man, but he may just be the love of her life. Shame that it is that Rois simply can’t tell the truth to her husband, but Griffin has secrets of his own. The politics of the time lead to a story filled with suspense, the romance is is passionate and real.

Rois comes off as impetuous and immature at first but evolves into a confident and honorable heroine. Griffin is the dream hero from the first page. He of course has his issues, but her always treats his woman with respect and understanding, even when he know she isn’t forthcoming with him.

Did you enjoy this review? If so, please tell us your thoughts in the comments below!

Most people think of retirement as a time to relax. For me, retiring at 36 from my job as a Navy Chief Meteorologist/ Oceanographer allowed me to pursue my passion—writing romance novels. With 29 moves behind me and having traveled through many more countries, I was anxious to create characters who reflected the amazing cultures and people I’ve met over the years.

I’ve written ten novels to date. Three were Viking novels set in 796, and six were about knights set in Scotland during the Bruce/Wallace era. I’ve also created a fictional precinct in Virginia Beach and have written the rough draft of my first romantic suspense. In the future, I intend to write fantasy novels—on which I’ve already begun to research.

I have many passions in life, but one that resonates in my life is that of giving. I firmly believe that each of us can make a positive difference in another person’s life. There are so many charities that I believe in. With each book I sell, I will tithe ten percent of my royalties to a charity of my choice. The first charity I've chosen is The National Trust for Scotland, which acts as guardian of Scotland’s magnificent heritage of architectural, scenic and historic treasures. Without the National Trust for Scotland, many of Scotland’s historical wonders would be lost.

Thanks for the reccomendation and review,I will plan to read this series 🙂