Join our newsletter to be the first to hear our latest news! Learn More
Home / Reviews / ARC Review: Heart of Venom by Jennifer Estep 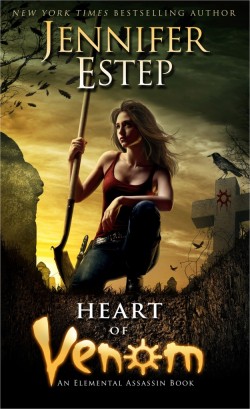 HEART OF VENOM will restore faith in readers that this is where the series should be. ~ Under the Covers

In book nine of the Elemental Assassin series, Gin’s past comes to haunt her and her friends, specifically her body-dispenser, Sophia in this latest installment. This makes it much more personal before and I felt as if readers got a much deeper insight into Gin’s mind. Before this, I thought she was callous, a bit stoic when it came to relationships. Killing is her talent and because of this, she is so readily able to distance herself from her task. It what makes her a good assassin.

However, in this latest serving by Jennifer Estep, I felt Gin’s fear for the first time. Her emotions are very much engaged and almost driving her to take down her enemies. As a result, I felt like I could relate to her more. Moreover, it kind of goes to show the development and growth Gin has made as a character over the course of this series with how much she has come to care about the people around her. She is no longer on her own but has built her own family around her.

Speaking of creating relationships, Owen comes back and well, I’m still not sure how I feel about him. I get excited when he’s around but I’m still a little bitter about some of the things he has done in the past. Owen’s presence brought up a lot of things that needed to be discussed between him and Gin and I think that it shows just how well they are together. Estep strings her readers along and it makes me wonder if a HEA if in the cards for them at all!

Meanwhile, there is a ton of action that you can expect in an Estep novel. I also loved learning more about Jo-Jo and Sophia, something we haven’t seen very much of in this series.

Though not my favorite of the series, I do believe that fans will be pleased with the route Estep is taking with this book. HEART OF VENOM will restore faith in readers that this is where the series should be. It’s another solid installment to the Elemental Assassin series. I only wonder where Estep will take Gin from here.

OK, you’re scaring me, “if a HEA is in the cards for them at all!”????? Oh hell, I will not be happy if they haven’t come to some sort of firm decisions in the whole relationship thing. Be done with this “taking a break”. It’s killing me!