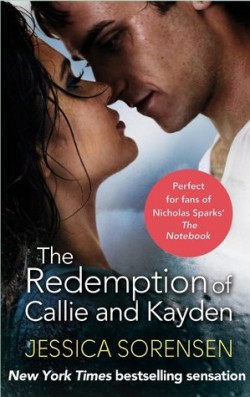 The Redemption of Callie and Kayden
by Jessica Sorensen

THE REDEMPTION OF CALLIE AND KAYDEN draws on human emotion and takes you into dark places. Although brimming with angst, it’s a love story that will overflow your heart with hope. This series is not to be missed. ~ Under the Covers

If you know me, then you may be aware of my slightly out of control love for Jessica Sorensen’s NA Contemporaries. You may also know of my mini rampage I had when I finished the last book in this series that ended with a killer cliffhanger. Well, that’s what made THE REDEMPTION OF CALLIE AND KAYDEN my most anticipated book of the year.

The second installment picks up where the first left off. Kayden has hit rock bottom and is trying to recover from it. His only connection to Callie has become thin and frayed, leaving readers feeling a copious amount of anxiety that could lead to an ulcer. As I started this book, I was literally shaking with excitement and anxiety at learning about what was going to happen to my favorite characters. I made it about 5 % into the book before tears welled up in my eyes.

Jessica Sorensen definitely doesn’t hold back. As the darker of her Contemporary series, there is A LOT of angst. A LOT. This book is saturated with it so much that you can’t help but feel for these characters. Both of these characters are broken beyond fixing, yet there is hope that they can get through it together.

Kayden and Callie are wonderful together. But they also understand that their blooming relationship is fragile and that they need to fix themselves before they can be with each other. It’s such a romantic notion that Sorensen plays on and it definitely warms the romantic side of my heart to see such selflessness in characters.

This is where I will be going into specific details about the book which will undoubtedly have some spoilers from the first book and this one SO YOU HAVE BEEN WARNED.

THE REDEMPTION hits on what readers have been waiting for – the big reveal on both sides. Callie finally tells her parents about what happened with her on her fourteenth birthday. I waited on bated breath for this scene and I thought it was approached well, but seemed very short also. I loved her father’s reaction but mostly her mother’s. If she had denied it happening, I think I would have thrown a fit because Callie wouldn’t have gotten the redemption she deserved.

I thought Sorensen was very smart in taking Caleb down through Callie’s brother and the drugs. But the very last pages of the book hint at more monstrosity that Caleb has committed that is connected to Luke and his sister, so I am definitely eager to find out what happened in Luke’s book!

Kayden’s big reveal happened with his therapist and I thought this was absolute perfection. As a Psychology major, I loved Sorensen’s take on the therapist role and thought his reaction to Kayden’s darkest secret was well-done. However, I am still not sure how I feel about his parents disappearing. Did his father get scared because he realized he was becoming like his own father? Did he run to escape prison? I am so happy that Kayden actually told someone, but I didn’t feel that total sense of redemption regarding his parents just yet. In all honesty, I wanted his dad to pay. I wanted blood and I didn’t get it. That’s shows how deeply I care for this character.

The next book is called THE DESTINY OF VIOLET AND LUKE. Naturally, I am on pins and needles waiting for this book. There are glimpses and clues in this book about Luke which only make me more interested in what’s to come. I have a couple ideas about what’s going on in his life, but can’t wait to see if I’m right!

THE REDEMPTION OF CALLIE AND KAYDEN draws on human emotion and takes you into dark places. Although brimming with angst, it’s a love story that will overflow your heart with hope. This series is not to be missed.

I want to know your favorite dark contemporary book (Doesn’t have to be NA!)!

“I want to talk to you,” he starts, looking at the cracks in the table. “I just don’t know how.”

He traces his fingers along the oval-ringed patterns in the wood as he reaches up with his other hand and draws his hood off his head. He rakes his fingers through his hair and rearranges his brown locks into place so they’re out of his eyes and flipping up at his ears. “Because you saw me like that. And I’ve never wanted anyone to see me like that, especially you.”

I pick at the cracks in the table, knowing I have to choose my words wisely. “Kayden, I’ve told you a thousand times that I’ll never judge you and I mean it.”

“It’s not about judgment, Callie.” He glances up at me and the misery in his eyes matches what lies inside my heart. “It’s about what you deserve.” He sighs, rolls up his sleeves, and traces his finger along a fresh scar running vertically down his forearm. “You deserve better than this.”

“No, I don’t.” I think about the last time I threw up in the bathroom because I couldn’t deal with the pain, something I’ve done for years and years. “You and I aren’t that different.”

He looks even gloomier as he jerks his sleeve back down and covers up the scars. “We’re nothing alike. You…you’re beautiful and amazing and the sadness and pain in you was put there by someone else.” He lowers his voice and sucks in a breath. “I put the pain there myself.”

I keep my voice soft as I lean over the table. “No, your father does.”

He shakes his head, staring at the counter. “I cut myself that night.” 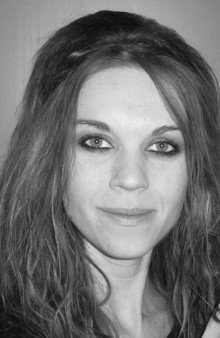 I’m the author of the Fallen Star Series, the Darkness Falls Series, the Death Collectors Series, and the New York Times and USA Today Best Seller, The Secret of Ella and Micha, a New Adult Contemporary novel.

I love writing and reading almost anything that is YA. Some of my favorite authors are Cassandra Clare, Sarah Dessen, Becca Fitzpatrick, Abbi Glines, Tammara Webber, Jamie McGuire and Jennifer L. Armentrout. I’m also an avid watcher of TV series The Vampire Diaries and of Modern Family.

I absolutely love music. When I’m writing, 9 out of 10 times I have music blaring in the background. My list of favorite songs could go on and on, since I have a very broad taste in music. But a few of my favorite bands are Chevelle, Rise Against, Alkaline Trio, Brand New, Death Cab for Cutie, Flight 409, Nirvana, and I’m going to stop there or else I’ll keep going on forever.
I don’t really have any favorite movies, but a few that I could watch over and over again are Anywhere but Here, Juno, Pride and Prejudice, The Hangover, and Bad Teacher.

If you’re interested in contacting me, here are a few options:

Under the Covers Book Blog
Reply to  Maria D.

ARC Review + Giveaway: The Certainty of Violet and Luke by Jessica Sorensen | Under the Covers Book Blog

ARC Review + Giveaway: The Resolution of Callie and Kayden by Jessica Sorensen | Under the Covers Book Blog

I have read so many content about the blogger lovers except this piece of writing is actually a nice article, keep it up.

Be especially wary in the event the broker attempts to push his own listing or perhaps
the listings that supply him an additional benefit for procuring
the buyer. Then, begin the research and look through online sources and also the old-fashioned way
– the population library. Walking down Roncesvalles Avenue has an organic think both delights
area residents and visitors alike, who leisurely stroll
across the streets for outings with the fam or perhaps a
reason to walk the dog.