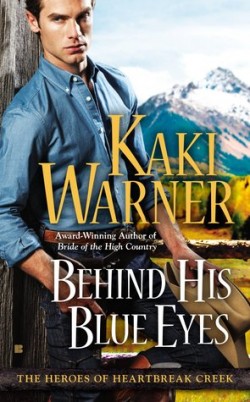 Behind His Blue Eyes
by Kaki Warner

“Ethan may be one of my favorite heroes.” ~Under the Covers

Audra Pearsall decides to move her “family” to Heartbreak Creek from Baltimore, Maryland after trying to her her father’s malady from some business associates. You see, since Audra’s father began suffering from dementia, Audra has been rather successfully publishing works in her father’s name for the Baltimore Society of Learned Historians. Instead of being caught, possibly arrested and having her father discredited, she makes the journey to the Colorado Territory to begin a new life with her father, and motley crew of her adopted family. On the way to Heartbreak Creek, Audra’s wagon breaks a wheel, which leads her to meet the indomitable, Ethan Hardesty, who against his better judgement, helps the irksome but interesting Audra out of her tight spot.

The handsome Ethan Hardesty has issues of his own. Leaving a brilliant career as a talented architect and going to work for the Railroad is his way of running away from them. When he meets the quirky Audra he doesn’t know which way is up, especially when his job is to try to get the Pearsalls to leave their property to the Railroad. In addition, someone has been sabotaging the work the Railroad has been making and it’s Ethan’s job to find out who is at fault.

Audra and her crew settle in Heartbreak Creek and attempt to make a good life, but everyday is a new trial when Audra’s father can’t even remember Audra is his daughter and he consistently wanders off. Ethan becomes her life-saver of sorts.

When the continual acts of vandalism on the Railroad turns into murder, with Ethan becoming a suspect, Audra finds herself confused about whether to truly trust this man she has begun to have feelings for, or to believe that he is one of the bad guys.

Behind his Blue Eyes (The Heroes of Heartbreak Creek) by Kaki Warner is an entertaining read. Kaki is a fabulous writer and I fell in love with her books last year. I really like Audra, she has a fierce sense of loyalty to her family members, whether by blood, or just by acceptance. She always thinks of everyone else before herself and it sometimes is to her detriment. Ethan may be one of my favorite heroes. While blaming himself for a death in his past, he holds so much internally. Audra brings out the best… or the worst in him and their discovery of one another makes His Blue Eyes a really great read.

I love historical western romance. Thanks for the review.