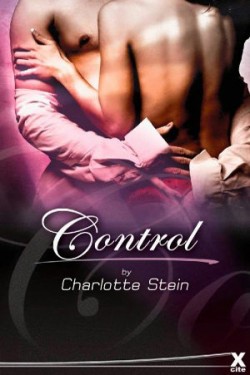 This book is like a pair of panties; it can be sexy one minute and then downright filthy in the next. ~ Under the Covers

I have one word to describe this book: unf!

I thought I’ve read my fair of filthy books. I was wrong until I picked up CONTROL. This book goes beyond dirty. It’s just plain filthy. I don’t think soaking it in bleach could make this clean.

Stein takes a bookstore owner that loves sex and pairs him with a VERY beta hero who stumbles and fumbles over just saying the word “tits”. Part of what I love about this book is the writing. Stein’s voice is so different than what’s already out there. There’s this quirky humor she likes to lace in her books. Paired with the unabashed heroine, you have a book that goes beyond sexy.

The opening scene has Madison having sex with a potential hire. Andy is quite a dominant, dirty-talking sex animal. Their first sex scene is off the charts hot and Gabe, the beta hero  just happens to witness it. Gabe ends up getting the job, but that doesn’t push Andy out of the picture entirely. Madison enjoys provoking Gabe, pushing his buttons and making him uncomfortable in her bookstore. It’s a little evil, but so fun to read. Sexual tension like you’ve never seen before scorches these pages until not even the reserved Gabe can stop himself.

Madison is the main reason why I loved this book. She is the opposite of a repressed sexual bookworm. She does and says things that we are all probably fantasizing about without pause. That unfiltered uninhibited attitude is what makes this book so sexy! It’s also what makes the relationship work between her and Gabe. She kind of reminds me of Nora’s character in Tiffany Reisz’s Original Sinners series. She has the same quick wit and unabashed sexuality. Maddie also has a little bit of domme in her.

Andy is another character that I ended up loving. He’s kind of like the sprinkle on top, or the chocolate syrup to that sundae; he’s offers that finishing touch. When he is brought back into the picture, I don’t think I could describe just how excited I was. The dynamic between Gabe and Andy is amazing and when you have Maddie sandwiched in between, it makes me hungry.

Charlotte Stein has been called the Queen of Filth many times before. That’s because there is truth behind it. This book is concrete evidence of why. I may need to purchase this book in paperback to display on my bookshelves because I don’t think there is another book that will top just how dirty this one is. This will be the book I will give to people who are looking for something just raw and beyond obscene.

This book is like a pair of panties; it can be sexy one minute and then downright filthy in the next.

Here’s a little taste of what you’re missing (and this isn’t even the hottest quote in the book!):

God, you want it so bad,’ he says in a voice as roughened as my own, and the juicy sounds my pussy is making don’t deny it.

Lol love the quote at the beginning…can’t wait to read Control-thanks for the great review Ann!

Great review Ann and I totally agree with Timitra that was a fabulous quote.