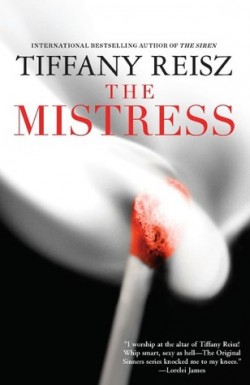 The Mistress
by Tiffany Reisz

One of the many talents of Tiffany Reisz is that she is able to breathe life to each of her characters. Beneath all the character kinks and their troubled pasts, there is a soul there and I feel it every time I read their POVs. ~ Under the Covers

THE MISTRESS is the final book in the Red Years Quartet and what a journey it has been! Over the course of these four books (and the novellas) I have fallen in love with every single one of the characters in this series. One of the many talents of Tiffany Reisz is that she is able to breathe life to each of her characters. Beneath all the character kinks and their troubled pasts, there is a soul there and I feel it every time I read their POVs. However, I can say that I felt it even more in this latest book.

There are so many moving threads in this book that I thought I’d do something different and talk about each character as I did in my THE SIREN review and bring it back to basics.

First off, I have to discuss The Queen herself, Nora. Like caulk around a tile, like binding in a book, Nora Sutherlin keeps everything together. Reisz further explores the Soren and Kingsley dynamic in a way that puts Nora right in the center of it. In a series of stories, Nora recounts her memories of her time with the two. As I said, this time you get a far more deeper understanding of Nora’s feelings for Soren and also Kingsley. I like the way Reisz told these stories because it not only solidified their bond to one another, but it brought to the surface emotions that we haven’t seen from Nora before this. As a Dominant, we see her strong and powerful. As a sub, we see her willing and ready. But now, we see her as a woman head over heels in love, fighting for the people she cares about the most.

Which leads me to Soren. I have always been intrigued by the Priest. He is intimidating, but with this character, I think Reisz may have created one of the most enigmatic personalities I will ever read. Though he inflicts pain for pleasure, he really is a selfless creature. He forgives those who have shunned him, he cares for those who has hurt him and he won’t allow anyone else to deal with the problem that arise because of him. I realized he really is a softy at the core.

Grace, whom we know as Zachary’s wife in the series comes back into the picture and while I could guess what was going to happen, I found it very interesting to watch it all unfold. Grace is very content in her marriage and she and Zach are very open with one another, telling each other secrets that most married couples wouldn’t share with each other. When Grace finds herself in the folds of this mess, she is drawn to the lifestyle that Soren, Nora and Kingsley all share. I find it quite fascinating how Reisz can create so much chemistry between one couple and then later on, create just as much combustible energy between another, when you switch and split them up. I don’t know how she does it, but I’m floored each time she does!

Since the book does start off where the last leaves off, you know that Wesley is going to have a big part in the story. I’ve been a fan of him, but in this book, I think I really began to understand him. He has never understood the need for pain to get off. And he never will. But after the events of this book, I think he’s come to accept that having a kink doesn’t make you deranged. It just makes it different from him. I think the books ends in a good place for Wesley but I wonder if we will ever see him again?

A new character is introduced. She is Soren’s niece, Laila. At first I wondered what was the purpose of her involvement in this book, but it all works out in the end. I liked her presence and her POV gave further insight into Nora and Soren’s relationship from a more personal, familial standpoint. I liked what her presence brought to the series and one character in particular.

And last but not least, my favorite character of them all – Kingsley. There is just something about this guy that does it for me. He’s so strong and so in control of himself on the outside, but when you add pain into the mix, he is a completely different person. The fascination between him and Soren lives on. If there was one thing I could have, I would want Soren and Kingsley together again. I get the feeling that he is genuinely happy with Juliette, but there’s still that ember burning for Soren that will never, ever burn out.

I’m excited for what the White Years will bring. These characters and their stories continue to enchant me. Even though this is the end of one quartet, it definitely doesn’t feel like it’s over for these characters yet.

I love every single one of these characters in this series but Kingsley has always been my favorite. To win a SIGNED copy of THE MISTRESS, tell me in the comments who your favorite character is in this series and why! Open internationally!

My favorite character is Nora.

My favorite is Nora because she is unapologetic for who she is.

I have to pick one? Well without Nora, the story wouldn’t be the same. I can’t wait to read this, thanks for the chance!

Hard to pick one. Torn between the “King” and Nora: they are both so sure about themselves. Did love Nora’s Angel – he was sweet.

My favorite character is Soren, very reluctantly at first. In the first book, I did not like him but as I read on, I came to love him. You can just tell he loves Nora and “King” so much I guess I just like really dominent (forbidden) men!!!

Probably Nora for the same reasons the others listed.

My favorite is Nora!

I’m sorry to say I haven’t read the series. 🙁 But it is on my TRL. I can’t wait to start. Thanks for the post and the chance.
Carol L

I haven’t read this series but I hope to soon 🙂

My favorite is Wesley… He’s just this innocently in love guy and I wanna give him cuddles. Yeah, I don’t know. 😛

I think Nora, but I’m not sure

Nora is my favorite.
Thanks for the chance to win!

Nora is my favorite!! She’s strong, confident, and intelligent.

Asking for a fave character is like asking which child is your favorite! Okay I don’t have children, but I assume that’s the same way. LOL!

Gosh…I love Kingsley for the same reason you stated, but because he was able to build an empire and knows exactly what secrets are worth keeping. Plus he dresses in period clothing (yeah my weakness)!

Since I’ve only read The Gift so far Daniel is my fave!

I haven’t read any of the series yet. Thanks for the giveaway!

Has to be Nora! One of the strongest female characters…ever! 😉

I haven’t had a chance to read this series yet but the books sound great!

Don’t have one yet 🙁 haven’t read this series! But I really, really want to! Thanks for sharing!

My favourite character is a bit of a tie between Michael (because I related to him the most) and Soren (because OH MY GOD!). Love the series and can’t wait to read this!!

Nora same as everyone else

I don’t have a favorite yet.

Soren is my favorite character. Just the fact that he’s a priest and his history with Nora made me love him right away.

I don’t have read this series, yet.

Shamefully, I haven’t read this series yet. I only have the first book on my shelf and being the series junkie I am I need them all before I start reading them or I might just go a little crazy and unfortunately I am not buying any new books since I am out of work. I am hoping soon!

I have not read any of this series but I have heard great things about it! I have it on my TBR list & I am looking forward to reading them!!

don’t have a fav; haven’t read them yet

haven’t read yet but sounds great!

I’ve read the first two books and I loved them.

I think my favorite character is Soren, because he is who he is and doesn’t make excuses. In the beginning I hated him but at the end of the second book I couldn’t help myself and I start loving him.

I would pick Nora because she is herself.

Nora – she is the meat in the sandwich – the flame within the candle – without her in this story it certainly wouldnt be what it is. She is who she is with not many reservations. I love her character to be whom she is – love like she does. It takes a strong woman to take hold of what she wants.

My favorite character is a balance between Nora and Kingsley- both are great. sdylion(at)gmail(dot)com