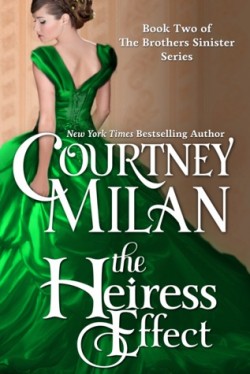 The Heiress Effect
by Courtney Milan

“THE HEIRESS EFFECT is unconventional, heart-wrenching, sexy and emotional ride…One of those one-sitting reads.” ~Under the Covers

I probably say this every time I review a Courtney Milan book but, I love this woman’s writing.  In true fashion, THE HEIRESS EFFECT is unconventional, heart-wrenching, sexy and emotional ride.  From the minute you start reading it until you finish the last word.  One of those one-sitting reads.

Miss Jane Fairfield has one hundred thousand pounds against her.  That’s her inheritance, which would make her a very desirable marriage prospect.  But she doesn’t want to get married because that would mean leaving her younger and sick sister alone with her guardian, their uncle, who likes to try new therapies on her.  To protect her sister and scare suitors away, she’s made herself into the loudest mouth, uncouth woman of society with a horrid fashion sense.  The game was working just fine until one Oliver Marshall sees through her charade to the woman underneath all of that.

Oliver grew up not knowing he wasn’t really his father’s son.  Turned out he was actually a duke’s bastard.  He’s fought against people that talked behind his back his whole life, and he’s fought to achieve every single one of his goals, political or otherwise.  He’s ambitious and won’t let anything stand in his way.  Except that Miss Fairfield is everything he loves, but the complete opposite to what he needs.

I’ll admit I was very scared around the beginning.  See, Ms. Milan always has a betrayal to overcome in her books.  Oftentimes it’s a difficult one to turn back from.  And when this book started I saw potential for major disaster.  However, the story didn’t go where I expected it to.  Oliver and Jane became friends first, fell in love, then became lovers.  It was such a natural transition to see their romance unfold without changing who each of them were.

This book also has a side story of Jane’s sister, Emily.  Sick and not allowed to leave home, she starts sneaking out and meets a dashing young Indian fellow.  All wrong for her.  And maybe she’s all wrong for him.  But they slowly develop their own relationship and even though we didn’t get to see much of them, I felt there was enough of a connection there to be happy for their future together.  Breaking the rules of society.

Another winner from Ms. Milan, that’s for sure.  And just leaves me that much more anxious to get the next book in the series.  I have to know more about Sebastian Malheur!

The book sounds really good Francesca. Thanks for the review.

Gowns on all covers from this series are really beautiful! 🙂
And sounds promising that stories in all books are great! 🙂
There are still some places in my TBR 🙂

Thanks Francesca for the wonderful review 🙂