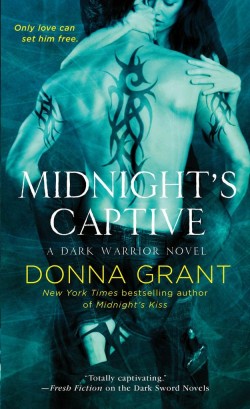 I don’t think there is another author who can compare in the extensive worldbuilding that Grant has been able to do in across all her series. ~ Under the Covers

MIDNIGHT’S CAPTIVE is book six in the Dark Warriors series. Wow, how did we get to book six already? There are several things I like about this series:

Overall, MIDNIGHT’S CAPTIVE is a fun, passionate book that I would recommend to readers of Lara Adrian and Karen Marie Moning. Grant has that touch of the mystical that both authors do so well, but also has the camaraderie that Adrian has in her Midnight Breed series. Yet at the same time, I don’t think there is another author who can compare in the extensive worldbuilding that Grant has been able to do in across all her series. That being said, if you’re a fan of the Dark Kings series, you’ll be seeing some familiar names.

Thanks for the review Ann. I love this series and I just bought this book the other day.

Awesome Lori! Hope you love it!

I’ve got my eye on this series…thanks for the review Ann!