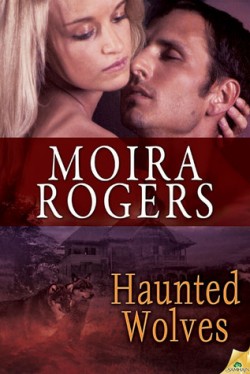 With so many characters, it’s easy to get lost in the worldbuilding, the magic and the romance. I thought Moira Rogers did this well. ~ Under the Covers

HAUNTED WOLVES is book two in the Green Pines series and begins where the last book finished off. As a result, I think it’s imperative that you this series in order. There is a shift of focus to a new couple, Colin and Lorelei. In comparison, this second installment is far most angsty than the first. Lorelei has some secrets that she has been hiding from everyone, however Colin is the one person who sees through it like glass.

It is their dark dance that is most appealing to readers. I think it gives us a greater understanding of the events that have transpired and how the wolves are coping with it. It also creates dimension in characters that are new to us but have the ability to burrow into our hearts.

As I read, I found this book to have a tone similar to Nalini Singh’s Psy-Changeling series and more specifically with her changeling characters. There’s that touch of angst and a harrowing tone that laces the pages of this book. But that isn’t to say that there aren’t smiles along the way. I thought there was a good balance of focus on the couple while also integrating the rest of the pack into the storyline. With so many characters, it’s easy to get lost in the worldbuilding, the magic and the romance. I thought Moira Rogers did this well.

The only thing that kept me from giving this book a solid 4 is that I don’t think it gave me a lasting impression. I was looking for something that clawed into me with the amount of angst involved. Apart from that though, this was a nice journey while it lasted.

Enjoyed reading your thoughts since I’ve read this one too.

Thanks! Hoped you liked it!