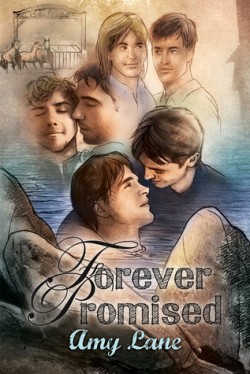 You won’t find more multifaceted characters elsewhere other than in a Lane book.  ~ Under the Covers

Keeping Promise Rock by Amy Lane is probably one of my favorite M/M books ever. It was one of the first ones I’ve tried and Deacon and Crick still remain as top favorites in this genre. I had quite high expectations so I feel a little conflicted about my thoughts and feelings on this book.

FOREVER PROMISES takes place a couple years after we’ve seen our guys. The entire book is written from different POVs so you get a chance to visit all your favorites. That being said, there are quite a lot of ongoing threads to this storyline. It kind of reminds me of J.R. Ward’s writing style in the BDB books where we get alternating POVs from core characters. The one thing I think that caused a problem for me about this was that it often felt convoluted.  There was one particular plot line that I was interested in but felt that it was often drowned or overshadowed by the others.

Without revealing any spoilers, the one plot line I was interested in was fascinating to me, but it also felt a little clichéd. I felt like it was “just another one of those books”. We see it happen in M/M all the time. It’s a natural desire and the obvious next development to a relationship, but I just didn’t think it held something particularly special. If it didn’t involve two of my favorite characters, I probably would not have cared so much, I don’t think.

Lane has a unique sense of humor that she likes to incorporate into her novels. They make the characters feel so much more real and HUMAN. The emotions that they experience feel so genuine and I think that’s a big reason why readers are so drawn to her work. I am consumed with bittersweet feelings about all this. I still don’t think I have grasped everything even as I write this review. All I know is that if you haven’t read this series, then I think it’s worth the shot. You won’t find more multifaceted characters elsewhere other than in a Lane book.

I haven’t started this series yet, but I look forward to it. Thanks for sharing!

I quite enjoy this series, Sophia Rose. Hope you love it too!