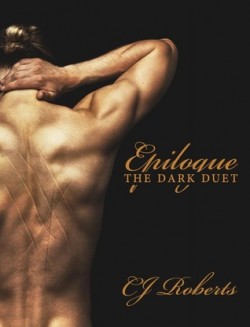 Epilogue picks up from where Olivia and Caleb meet in Barcelona and is from Caleb’s POV. There were many questions left unanswered. What else happened at the fountain? What did they say to each other? How did they get to where they were/are at?, etc, etc. C.J. did a wonderful job in explaining some of these questions to her enquiring fans. What drew me in more was that it seemed like Caleb was talking only to you, as a reader. He let you in his sadistic, twisted, loving thoughts. He’s f*cked up. What more did you expect?

Caleb has demons and he has nightmares. He’s tortured and holds regret and remorse from what he did to his previous victims, Rafiq but most of all to Olivia. Either you loved to hate or hated to love Caleb from the previous two books, you can’t help but fall more into him. He’s not a good guy and he makes no apologies for it except to his Kitten. Caleb has this void and he mentions it quite often. The void needs filling and Olivia does that. How? Read the book.

They both try to start fresh with their new relationship as James and Sophia. Sophia has adapted to her new life while James stuggles daily. He was a kidnapper, rapist, torturer and killer. How does he change from being that to normal? He doesn’t know where or how to fit but Sophia helps bring him out little by little. Either it’s with her two great friends Claudia and Rubio, being tourists, introducing him to video games, watching movies. She shows him how life could have been if he wasn’t taken as a child and what he endured in that time.

They infuriate, hate, passionately love each other. Does that make sense? No. Yet somehow that is how their relationship is. Their story is heartbreaking as well. They punish each other from the past events and little by little the past is somewhat forgotten. Don’t get me wrong, it’s there but it’s not at the forefront.

Now let’s get down to the nitty gritty cause it’s there and yup it’s muy CALIENTE CALIENTE CALIENTE(HOT HOT HOT)! They both have dirty mouths and one of my favorite lines had me smiling and saying, “Oh yeah”… “I said I was going to wash your mouth with your cock.” Caleb knows what he loves in sex. Olivia knows about sex from what she endured with Caleb. He “trained” her and the “training” never left Olivia. There are many kinds of sex plays that they do and what I loved about it is that they finally communicate on what they both want and get from each other.

If you’re a fan and get engrossed in a couple that you don’t want to do without then this story is for you AND it leaves off where there MIGHT be some more of Caleb and Olivia.

Another favorite line(and there are plenty) is…“You are the best thing that’s ever happened to me, Caleb. You’re also the worst.”

Her debut novel, CAPTIVE IN THE DARK, has sold over 150,000 copies and is the first of three books in her bestselling and award winning series DARK DUET.

She was born and raised in Southern California. Following high school, she joined the U.S. Air Force in 1998, served ten years and traveled the world.

She writes short stories under the name Jennifer Roberts.

Thanks for the review – this is a new to me author and book!

I loved this story also and I agree with this review thoroughly. I would have given this 5 stars as well, if not for the disappointing, or flat ending. I wanted a little more from this book in those last few sentences.