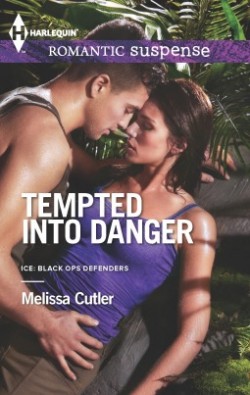 Tempted into Danger
by Melissa Cutler

“Tempted into Danger is totally wicked!!! This novel has the Bad Boys(part2) feel to it with a hint of Bourne Supremacy. It is non-stop action, suspense and an exceptional storyline” ~Under the Covers

Tempted into Danger is totally wicked!!! This novel has the Bad Boys(part2) feel to it with a hint of Bourne Supremacy. It is non-stop action, suspense and an exceptional storyline

Vanessa Crosby who knows more than she should, stuck her nose where it did not belong. And it will land her nothing but trouble. After all, her discovery is a top-notch case involving money laundering by Panama crime lords. Of course, something this big will not go unnoticed. She is immediately wanted by both government and the drug lords in question. Luckily, Diego Santero, a Black Ops Defender is assigned to secure Vanessa and her new intel. While Diego does a wonderful job keeping Vanessa alive, well, shit hits the fan when betrayals and trust become an issue

Diego is super hot with his military get up and tough guy persona. I love seeing alpha males of our time, they’re just so damn hot! His ability to bow down when needed, risking his life for the safety of his charge and the possessiveness he showed over Vanessa was just panty-droppingly sexy. I love that Diego is attracted to Vanessa who is not your typical hot, kick ass heroine but a simple, pretty enough gal with a brain like Einstein. And I have to admit, I admire her for having the balls for doing the right thing when she noticed a possibility of money laundering in the bank she worked for. I have to say that her advice about the “tissue rule” is the best advice there is. Diego and Vanessa’s interaction during their time together was stress inducing, no doubt. It was full of life threatening scenes such as explosions, shootings and surviving the Panamanian rainforest. Their time together was also a revelation finding love where they least expected.

I also enjoyed the interaction between the rest of the crew. The banters between the Black Ops team were great, but seriousness was there when definitely needed. I was eating up the military lingo Diego and his team used. The way Diego threw orders out and the way he said “roger that” just made me swoon all over him. Of course, as any military man, pain is just not accepted. So when you see these guys react to pain as if it was not there, is just too cute.

I instantly became a fan of Ms. Cutlers after reading her western novel, The Trouble with Cowboys. I can tell you right now that nothing has changed. She still has me under her spell and I was flat out enthralled with her writing. She excels in this genre as she does with her Western novel.

ARC Review: Hot On The Hunt by Melissa Cutler | Under the Covers Book Blog