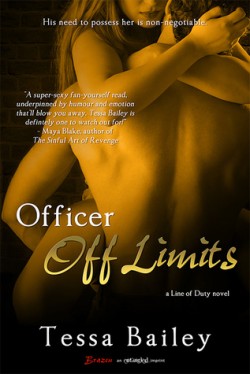 Officer Off Limits
by Tessa Bailey

Each of the heroes in the series have filthy mouths and it has become the one thing I anticipate whenever I pick up Bailey’s novels. This series has naughtiness in spades. ~ Under the Covers

Story Brooks has a predicament on her hands. She has an asshole fiancé. But lucky for her, about two weeks before her wedding, he decides to call the whole thing off and leave her for another woman. Like I said, he’s an asshole and though Story is boiling with fury and hurt, this is a good thing. Especially when it brings her right into the arms of NYPD hostage negotiator, Daniel Chase.

But wait! Before we get to the hot, dirty talking hero, another hit comes at Story at full force. Her father has suffered from a heart attack, which leads Story to his bedside at the hospital. The kicker is that Story’s father is Daniel’s mentor and well, let’s just say that Story’s father knows of Daniel’s conquests and would not like his daughter to be next in line on that ride.

Tessa Bailey once again gifts readers with what they have been clamouring for – a sinfully hot, dirty talking hero. This is becoming a signature thing for Bailey, I think. Each of the heroes in the series have filthy mouths and it has become the one thing I anticipate whenever I pick up Bailey’s novels. This series has naughtiness in spades.

While I loved Daniel and Story together, I did think that the conflict in this story was the weakest of the three books so far. Their explosive chemistry seemed so bright in contrast to the conflict that it just didn’t feel like a real issue to me.

On the flip side, there are quite a lot of hilarious moments. OFFICER OFF LIMITS just might be the funniest of the series with all its hilarious antics and outrageous characters. One thing is for sure… Each time I pick up a Tessa Bailey book, I know I’m in for an entertaining ride!

I have the first two but haven’t gotten to them yet. I hadn’t read anywhere that there was humor in them (just hotness), so I’ll have to push them up the pile. I think I’d already added this one, but I’ll make sure after reading your review.

There’s humor for sure. The heroines are quick with the comebacks and definitely don’t let the heroes have all the fun. Some snark and some sass comes with these girls 🙂 Enjoy!

I really enjoyed this latest installment in the series…love Tessa’s dirty talking heroes!

Yes, I can’t get enough of them!

I enjoyed reading all three books,I love this series 🙂
Each book from Tessa Bailey gives you story hot like hell 😀
Daniel – My Man 😀

Can’t wait for the 4 book from this series 🙂

Thanks for the awesome review Ann 🙂