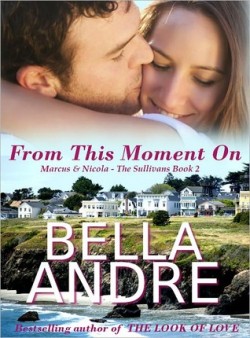 From This Moment On
by Bella Andre

Andre’s writing is so eloquent and free-flowing, it almost seems as if you’re not reading at all. It feels so effortless and that’s what makes her writing so enjoyable. It feels like an escape.~ Under the Covers

Returning to the Sullivans has always been a treat. There is just something about the eldest that gets me. Marcus has been the responsible older sibling to his brothers and sisters since his father has died. Since then, his life has been in perfect order until he realizes that it is all a lie. That spurs him to do something he hasn’t done in awhile – go to a club and pick up a woman for a night of hot, mindless sex.

There he finds Nicola – or Nico, as she calls herself on stage. As a pop star, Nicola has been in the limelight for too long and now hoping for a break from it all, even if it’s just one night. She hasn’t had a one-night stand before, but one look at Marcus and she knows she wants him.

Rereading this book made me realize a lot of things. First thing is that Andre’s writing is so eloquent and free-flowing, it almost seems as if you’re not reading at all. It feels so effortless and that’s what makes her writing so enjoyable. It feels like an escape.

There are so many quotable lines in this book that made me swoon. I ended up bookmarking almost every single page, but this quote particularly got me. Marcus is simply amazing:

“And then her eyes met his, illuminated by a beam of light in the dark room, and although Marcus hadn’t drunk nearly enough at the bar to be unsteady on his feet, one look at those clear blue eyes had him fighting for balance.”

The second thing is also about Marcus. One thing that I think makes a hero feel more real to readers is honesty. Marcus has that in spades. Even though Marcus took Nicola home for a night of debauchery, he was never once manipulative or too sauve for his own good. I think his experience with Jill deterred him from living his life in more lies. Those characteristics form a great hero, making him feel more real, as if he could step out from the pages of the book.

If you read the self pubbed version, the book is relatively the same with a few more additional scenes. I loved them and think they are worth a second look. After rereading this book, I found that I loved this more than I did when I first read it – and I loved it a lot that first time too! If you’re interested in reading more of my thoughts of this book, you can read my first review of the self-pubbed version here.

Good review! I haven’t had a chance to read this series yet – but I do have a couple of the books on my kindle