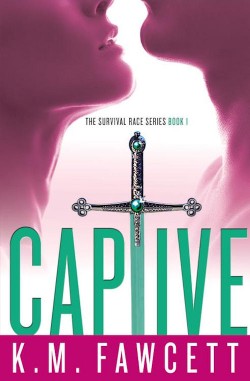 I was expecting a cheesy sci-fi romance, with strange aliens, men with muscles instead of brains and the women who swoon for them. A teensy part of me was a little disappointed that this wasn’t the case… ~ Under the Covers

The last thing Addy Dawson remembers is a trying to escape a forest fire and failing, but she wakes up she is in a square room with no doors and windows. Naked. But she isn’t alone, there is also a naked man, Max, in with her, who has one thing on his mine…breeding. As Addy comes to understand the strange and cruel new world she is being kept prisoner in the more she needs to escape, together her and Max must find away out of their captivity and survive.

When I first started reading this, I was expecting a cheesy sci-fi romance, with strange aliens, men with muscles instead of brains and the women who swoon for them. A teensy part of me was a little disappointed that this wasn’t the case, I love some cheese, but mostly I was pleasantly surprised, instead of being a massive corn fest instead it was a survival story about two people doing their best in an impossible situation.

If you like a tortured hero than this would be the book for you, my poor darling Max, although at first I wasn’t sure of him, he soon won me over as you realise what he has been through. I also really liked Addy, she was clever and tough. The reason this got 3.5 feathers rather than 4 or 5 was because although I liked the romance, there didn’t seem enough of it, one minute they kind of hated each other and then wham, they didn’t it was a fairly quick turnabout, it was only really the last parts of the book that really showed how well they worked as a couple.

But this was a good book, certainly full of adventure, a few fluffy aliens and when it finally got to it, a really great romance.