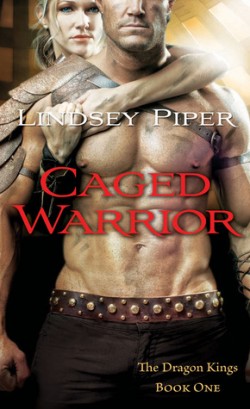 “Ms. Piper did deliver a sexy warrior ” ~ Under the Covers

Ms. Piper wrote a very promising start to a new series. Caged Warrior is not your typical Dragon books, in fact; there are no dragons in this book, which was a bit disappointing only because the cover and title shouted it was a dragon book. But let me assure you that even without dragon shifters, this novel is overall a good read.

Let me tell you the things I liked about this book. First is the cover. Okay, I will tell you that I picked this book up just by looking at this cover. It just promised me a hot sexy warrior. Well, Ms. Piper did deliver a sexy warrior. Leto is a champion of underground cage fights, which reminds me of UFC fighters and I imagined him to be that very person on the cover. Of course, Leto is from a race with supernatural powers , and it gave this book an exciting twist. Now, what made it a bit complicated was that Leto was not a freeman but really a slave fighter and in charge of training newcomers. That’s where Audrey, aka Nynn comes in. She is also of the same race but has lived in the human world to be with her husband and son. Unfortunately, in this violent, almost extinct world, her husband was murdered. Now, Audrey is slaved to fight for her and her son’s freedom. Her captivity somewhat reminded me of Captive in the Dark by CJ Roberts. Not as dark but both heroine were kidnapped, abused and trained. They also both fell in love with their captors. I know they are of different genre , but I found it similar in some ways, IMO. I liked Audrey, she is a mother on a mission to save her son. Any woman who comes into a man’s world and proves her self is just gets much respect from me. My heart broke for her with all her experiences in the beginning of this book. I’ll tell you right now though; this heroine is strong and can fight like there’s not tomorrow.

The world building was overall good. It is a dark and vicious world but thriving to survive. I was a bit disappointed that Leto, the man in the cover, did not shift into a dragon , but I do like him just the same. I also would’ve like to read more of his background. I feel like there’s more to him then what was revealed. One thing that bothered me most was the pace in the beginning of this book. I thought it was slow and the only think kept me going was the intriguing story line. It was not until half way through that the pace picked up and became more of a page turner. Overall, Caged Warrior is a good start to a new series , and I am optimistic for a good sequel.

ARC provided by Publisher in exchange for an honest review

Thanks for the review Angela, although the non dragon shifter thing is disappointing -I’m a sucker for dragons!- the cover and the storyline seems to make up for it.

Yeah,the cover is really awesome 😀
And this book sounds interesting 🙂

Thanks for the honest review Angela 🙂