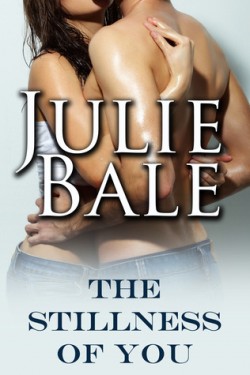 The Stillness of You
by Julie Bale

Bale had a huge challenge on her hands, and in the end, I felt that she did a good job of keeping an accurate portrayal of the disorder while making it an entertaining read as well. ~ Under the Covers

There were a couple of reasons why I wanted to read this:

First thing is that Julie Bale is the other pen name of Juliana Stone and as a Canadian author, I definitely wanted to support fellow Canadians. It was also nice to see Bale make the hero, Ben a Canadian and a hockey player.

But perhaps the big reason why I wanted to read this was because the heroine, Georgina has bipolar disorders. Mental illness has always fascinated me and that’s why I did my undergrad in Psychology. This book fit my interests to the tee and I wondered how Bale was going to face the stigma of mental illness and create a heroine that stayed true to the disorder while also making her likeable. Bale had a huge challenge on her hands, and in the end, I felt that she did a good job of keeping an accurate portrayal of the disorder while making it an entertaining read as well.

Bipolar is a hard disorder to give your characters because emotions are so intense and vivid, resulting in manic episodes and depressive states. It’s hard to keep those characteristics there while keeping the attention of readers. I thought Bale did show some good symptoms of the disorder, but I also noticed there was a lot of telling, rather than showing. Most of the hard times have passed for Georgina and she feels as if the worst of the storm has passed and she is recovering, so readers only get what is being shared with Georgina. In the present, we don’t actually see too many of the symptoms of bipolar as G falls in love with Ben.

I also felt that there was a lot of emphasis on the lust aspect than the romance in the beginning. Being flirty and coy is part of the disorder but I didn’t start believing in the romance until more than halfway through the book when Ben remained persisted. The lust in the beginning wasn’t enough until I knew that Ben was there to stay. I loved how unchanging and steady he remained for Georgina. He is definitely what he needed.

I’ll be looking forward to reading THE CHAOS IN ME, the second book in the Beautifully Damaged series to see where Bale takes her stories next.

When Julie isn’t writing she’s busy looking after a family that includes a couple of kids, her husband and a dog who is prettier than some people she knows, and a cat who thinks he’s human.

She loves The Walking Dead, Pretty Little Liars, The Foo Fighters, Vampire Diaries, The Fray, and The Gilmore Girls. And when she has time, she loves to kick back and read yummy romances with hot guys and girls who are cool enough to hang out with.

Thanks Ann…adding to my wishlist!