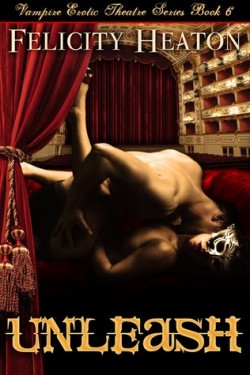 “Ms Heaton proves to be a wonderful storyteller with this last issue of VET. Not only that it was heart-warming, it was also hot as hell.” ~Under the Covers

I have had my eyes Snow from the very start, and since then, I have been his number one fan. As much as I’ve read about him, I knew he had a twisted and effed up past that had cost him to have a terrible blood lust.  Now I know that it was an act of compassion that doomed him.  This book tells us Snow’s nitty gritty past and reveal the heroine who will UNLEASH him to his salvation.

Snow was very young when tragedy happened, and he’d lost his reason to live. Except his responsibility and love for his brother kept him alive. He has been to hell and back for him, literally. With his past, he’s never thought or want any happiness for himself. And now that his brother has found love, he yearns for what he’s missing. It’s hard for me to mention specifics in fear of giving spoilers. But I can tell you right now that his connection to this angel was a bit of a shock for me. If and when you read this book, you’ll see what I mean.

Ms Heaton had picked the perfect heroine for Snow. I was afraid no heroine can ever be good enough for him but Aurora proved to be more than just any Angel. She had turned out to be an alpha female that would do anything for Snow no matter the cost. I actually love her as well. It was wonderful to see that the VET crew had truly made a family. Not just by blood but everyone at Vampirotique. I love seeing everyone protect each other, to death if need be. And the focus to help or save Snow was just heart warming.

Ms Heaton proves to be a wonderful storyteller with this last issue of VET. Not only that it was heart-warming, it was also hot as hell. Wait until you see how Snow claims his mate. I am ecstatic that we finally get Snow’s book, but it also ends the series which I’m not happy about. Well done, Ms Heaton. I will look forward to your upcoming work. And maybe someday get a glimpse of Snow in your future novels.

Thanks for the great review! It’s not the end. We’ll meet Snow and the gang again in my Eternal Mates series of novels which begins in 2014 🙂