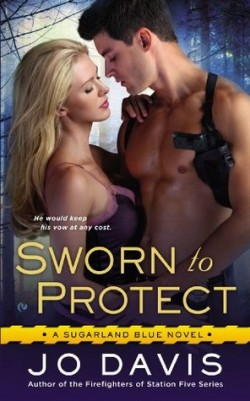 Sworn to Protect
by Jo Davis

Ms. Davis did a fabulous job with keeping me interested throughout this book. I love the balance of suspense, family drama and romance that she brought to this novel.” ~Under the CoversBook Blog

Detective Shane Ford just lost his best friend, a famous football star Brad Cooper. His death was questionable and leads show that there may be foul play. Mean while, Shane is left with the care and guardianship over his teenage godson Drew. Poor guy has to adjust to a new school while having to deal with his dad’s loss. As a teenager would, Drew acted on what any lost teen would do, rebel and get in trouble with the law. A very rough situation.

In the sidelines, Daisy Callahan, a juvenile detective offers her service as a friend to Shane. She checked up on Drew and she offered him support in general. But if you read Armed and Dangerous, the prequel to this series, you know that Shane and Daisy had a past together. Daisy cares for him more than he will ever know.Ms. Davis did a fabulous job with keeping me interested throughout this book. I love the balance of suspense, family drama and romance that she brought to this novel. The humor and banter were also sweet additions. I love Shane and Daisy. I thought they balanced each other and a workforce romance gone right. Where their sexual attraction was stronger in the prequel, their connection was stronger here. I feel that they connected on a deeper level. Don’t get me wrong, there are still plenty of steamy scenes and sexual tension in this book. No worries.

What surprised me the most is the there were also heart wrenching moments that made me tear up. I mean, this book is not just about the romance; it also focused on Drew’s Point of view. My heart just broke for him. It would be nice to actually see an adult story of Drew when he grows up. He has a very personable and intriguing character.

What I didnt know is that this book is closely related ms. Davis’ Fire Fighter of Station Five series. There were some appearances of firemen that peaked my curiosity. Like why was one called Six Pack? I definitely would want to know, so, that series have been moved up on my TBR list.

Overall, Sworn to Protect is a wonderful start to Sugarland Blue series.

Thanks for the review Angela! I’ve just added this series to my reading list and look forward to seeing how I like it.

First time I hear about this series,but I love to read romantic suspense,it’s one of my favorite genres,I will give a chance,definitely 🙂