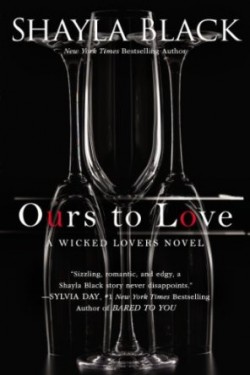 Ours to Love
by Shayla Black

“OURS TO LOVE is a slow-burning, sensual read” ~Under the Covers

How would you describe OURS TO LOVE in three words?

Readers are familiar with Xander, but Javier, his brother is a newer character. What did you think of Javier?

Annie: I thought Javier was an interesting character. Right from the beginning of the book, we get a lot of information on his past and what he had endured already. He’s a bit of a tortured hero, so I could tell that Black had a lot of fun with his character. He was so different in personality from Xander, but I also thought they complement each other well. Together, they were almost like a ying and a yang – the perfect balance of men.

Francesca: First of all, I wasn’t happy that his dead ex wife never came back from the dead.  I mean, she had an awesome name I kept wishing she wasn’t the bitch that tore his heart out.  Once I got past that, I actually liked Javier maybe even a bit more than Xander.  And that’s not what I was expecting because coming into this book I was all about my crush on Xander.  But there’s something to be said for the tall, dark and brooding hero who is in control about most aspects of his life but let emotions run deep and sometimes take over.

Annie: I thought Black spent a lot of time on building that trust between London, Xander and Javier. There were no shortcuts taken here and that was very important in forming a strong relationship amongst them all. London has a dark past and isn’t comfortable with the scars she has. So Xander and Javier really had to take their time to allow her to adjust to them physically as well as emotionally.

Francesca:  As Annie said, there is a bit of time spent on the building of trust, and that was extremely necessary.  Actually, I would’ve wanted even longer than it was because I still had some problems letting go and believing the trust was there.

On a scale to one to ten, how would you rate the steaminess?

What were your final thoughts to OURS TO LOVE?

Annie: OURS TO LOVE is a slow-burning, sensual read that deals with darker issues than we’ve seen before in the series. It still has that touch of suspense that I love and expect and there is no question that Black can pen scorching hot sex scenes. Though not my favorite of the series, I still love returning to this world again and again.

Thanks for sharing the review