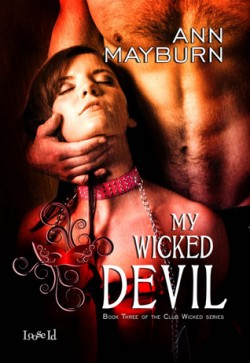 My Wicked Devil
by Ann Mayburn

The romance was strong, but the book faltered a bit in believability and continuity ~ Under the Covers

We’re back in Club Wicked and the day this place starts to cool down, that’s then day that I will leave. Until then, you can be sure I’ll be a regular with this series. MY WICKED DEVIL is book three in the series but I do believe it can be read as a standalone. This is Lord Bryan’s book, the sadist. I was very, very excited to read this book I wanted to see the sadist at work. Bryan has always intrigued me in this series so getting his book so early on in the series made me do a little happy dance when I learned he was next.

The heroine of the story is Kira Harmony. She was an actress before a motorcycle accident occurred while filming a movie. Her stuntman lost control of his own bike and clipped hers, sending her flying which gained her several painful injuries including a broken hip. As a result, she cannot have sex with penetration because it hurts so bad. In this time, she has lost lovers because of this and looks for release in other women. But even though Kira is bisexual, she yearns for a man to fulfill her deepest desires.

This is when she goes to Club Wicked to go sadist shopping. On the lookout to find a Dom that will help her learn how to love pain during sex, the dark and mysterious Lord Bryan catches her eyes. She wants him and only him to help her.

I found it hard to believe that Kira could LEARN to love pain during sex, especially when she had no experience with it before now, as if she could suddenly turn masochistic after her injuries. I tried to keep an open mind about it all, but even by the end of the book, I still wasn’t fully convinced. Similarly, Bryan’s dark past didn’t seem that much of a big deal to me. He was blackmailed and after being portrayed as a bad, dangerous guy, he left London to pursue a regular life. As his past catches up with him, it puts a strain on Bryan and Kira’s relationship, but not so much that it felt like a huge obstacle.

The romance was strong, but the book faltered a bit in believability and continuity. Other than that, I really enjoyed MY WICKED DEVIL.

Up next is a novella called MY WICKED TRAINERS with Rory and Liam. I’ll be looking forward to that one.

Ann is Queen of the Castle to her wonderful husband and three sons in the mountains of West Virginia. In her past lives she's been an Import Broker, a Communications Specialist, a US Navy Civilian Contractor, a Bartender/Waitress, and an actor at the Michigan Renaissance Festival. She also spent a summer touring with the Grateful Dead(though she will deny to her children that it ever happened).

From a young age she's been fascinated by myths and fairytales, and the romance that often was the center of the story. As Ann grew older and her hormones kicked in, she discovered trashy romance novels. Great at first, but she soon grew tired of the endless stories with a big wonderful emotional buildup to really short and crappy sex. Never a big fan of purple prose, throbbing spears of fleshy pleasure and wet honey pots make her giggle, she sought out books that gave the sex scenes in the story just as much detail and plot as everything else-without using cringe worthy euphemisms. This led her to the wonderful world of Erotic Romance, and she's never looked back.

Now Ann spends her days trying to tune out cartoons playing in the background to get into her 'sexy space' and has learned to type one handed while soothing a cranky baby.

Take Me, Break Me from Cari Silverwood. Its told from the Dom’s POV and he is coming into his own as a sadist. It will blow your mind.

Ah I have that one, Marika! I think I will need to bump it up!! I know there is needle play and ack, I dont like needles so that’s why I haven’t already jumped into it by now 🙂 Thanks for the rec!