Join our newsletter to be the first to hear our latest news! Learn More
Home / Reviews / ARC Review: Dark Days by Caitlin Kittredge 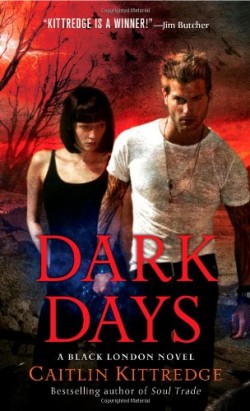 …what I really like and come back for more of is Jack and Pete, they aren’t your typical hero and heroine, in general the couple are foul mouthed, rude and aren’t afraid to play dirty to win. ~ Under the Covers

The Apocalypse is Nigh…again. Jack Winter’s visions shows London in ashes, the ones he loves dead or taken and the wall between the worlds crashing down; mingling the hosts of Hell and all the vile creatures of the Black in with the daylight world. To stop the coming apocalypse Jack may have to sacrifice more than his life and finally join the Morrigan leaving all he loves behind.

I love the Black London series, it is dark and gritty, filled with difficult situations and has one of the most interesting leading couples, Jack Winter and Pete Caldecott. Dark Days continues the tradition set in the previous books in this series; setting up seemingly hopeless situations that never have an easy answer and a victory clinched at the maw of defeat through cleverness, luck and sheer ballsiness.

And, although I love Ms Kittredge’s plots and the ideas she puts in her books, what I really like and come back for more of is Jack and Pete, they aren’t your typical hero and heroine, in general the couple are foul mouthed, rude and aren’t afraid to play dirty to win. But I like them, they are interesting and the dark side of each of them makes the more so. They are also a perfect match for one another and I love how their relationship has grown through out the series creating a marriage so strong that sometimes the weight of the apocalypse rests on it.

What I also love about these books is the writing, everything is brought to vivid life and sucks you deeper into the book. For example the dialogue is excellent, the way Jack and Pete speak, especially Jack, he manages to be both crude but also poetic and clever at the same time, like below:

There was no higher power. There were the beings older and hungrier than you, and there was avoiding being stepped in when they got a hair up their bum cracks

This was another fantastic installment in the series, although it did end on a little bit of a cliff hanger, which means I now can not wait to get my hands on the next book!

Thanks for the review. I love this series. Am totally bummed that this is the last book.