I have a confession to make…I have a bit of a crush on Madeline Sheehan.  I want to live in her brain, with all her sexy and crazy characters.  I need them to talk to me too.  But I guess I’ll just settle for impatiently waiting for her to continue writing them out.  In the meantime and while we wait for Ripper and Danny’s story to come out, we had the chance to ask Ripper a few questions and here’s what he had to say.
UNBEAUTIFULLY is such an anticipated book this year and it’s your story!  I can’t tell you how excited I am to read it.  What can readers expect from it?

I don’t wanna be givin’ too much away but it’s about Danny and me and our story ain’t pretty.  Fact is, most of it is pretty damn fucked up.  But the way I figure it, is if you don’t gotta fight for somethin’ it ain’t worth havin’ in the first place.

How would you describe Danny in a few words?
She’s a brat, that’s for damn sure.  But the girl is hot as fuck and has a heart of gold.  She’s sweet and soft…  Danny can make me feel more than I’d ever felt before just by lookin’ at me.
What’s your favorite quote of the book?
“Baby, listen to me.  I ain’t beautiful, you are.  You’re so damn beautiful you got it spillin’ out all over the place blindin’ you into thinkin’ I’m beautiful when I ain’t.  Farthest thing from it.”


– Ripper to Danny, UnBeautifully.
What do you think of how your story compares to SoA (the popular tv show)?
I’d say there are similarities bein’ that we’re an MC and that damn show is about a MC, only difference is ain’t none of my brothers would rat one another out.  Never.
Who would win in a fight? Deuce or Jax?
You crazy?  Didn’t that mother fucker used to model underwear?  Heard he never even rode before he started up on that show.  Pretty sure my Prez could kick his ass.
Tell me about your time as a prospect for the Horsemen–what attracted you to being a member of a MC club?
Just kinda fell into it.  Met Deuce and some of the boys at a bike rally in Texas.  We hit it off real quick and me havin’ no family and shit, it just seemed right.  They had me doin’ grunt work for a while but nothin’ I can be talkin’ to you about, yeah?
Who is your best friend in the MC?
Got two of ’em.  Cox, that crazy fucker and Hawk.  Hawk’s my boy, straight up.
What do you do to relax?
I fuck.  Knocks me right the fuck out.

What attracts you to a woman? Turns you off?

Pussy is pussy, if a bitch wants to party, I’m down, but yeah, I’m all about the tits. Big ones, little ones, don’t fuckin’ matter, I like ’em all.  What turns me off?  A bitch who don’t wanna party.
Do you have any sexual kinks? Handcuffs, blindfolds, restraints, etc….
Nah, I ain’t picky.  Like eye contact though.  Like seein’ what I’m makin’ her feel, like watchin’ her fallin’ apart ‘, tits bouncin’, eyes rollin’ back, breathin’ hard.  That’s some hot shit right there.

Fuckin’ on my bike.  Got one of my girls beneath me and another on top.  Ain’t nothin’ sweeter.
What do you think of love?
It’s trouble.  But like I said, if you don’t gotta fight for somethin’ it ain’t worth havin’ in the first place.
And of course for a serious question now…. got anything to spill on Madeline Sheehan?

Christ, that woman is crazy as hell.  You know, we had a thing back in the day, girl took me on the ride of a lifetime.  But I wouldn’t ever do that shit again.  High maintenance is puttin’ it midly, she’s right up there with Kami.  Bitch coined the term, “Wild Pussy” and if you know her you know what I mean.  She’s got a good heart though.  Love her.  We all do.  But, Christ, I feel bad for her man.

*sigh* I think it got hot in here all of sudden.  Isn’t he the best?  And here’s his story…which I’m NOT SO PATIENTLY waiting to read.

*Warning: This book contains several aspects of the uglier side of life; it is not for everyone.*

The story of Ripper and Danny.

The first time I fell in love it was with a pair of blue eyes and a wide dimpled grin.

“Your old man loves ya, Danny girl,” He whispered. “You never ever forget that, yeah?”

I never did. And I never thought I could ever love any man as much as I loved my father. But as we grow, we change, we begin to make our own decisions and thus become independent and self sufficient and start turning away from our parents and turning to others. We form friendships, strong bonds and ties and begin experiencing life outside of the bubble we grew up inside of.

And we fall in love…a second time.

The second time I fell in love it was with a badly scarred face, the stuff of nightmares; the sort of disfigurement that mothers steer their children away from. Ugly, jagged slashes marred the skin from the top of his skull, down over his right eye, an eye that had been dug out of his face with a serrated blade. The scars continued across his cheek, over his lips and down his neck, ending at the top of his shoulder. His chest was a hundred times worse; scar tissue as far as the eye could see.

“Baby,” He said gruffly, “Man like me got no business with a girl like you. You’re nothin’ but fuckin’ beauty and I’m a whole lot of fuckin’ ugly who’s already halfway to hell.”

But he was wrong.
Everything has beauty. Even the ugly. Especially the ugly.
Because without ugly there would be no beauty.
Because without beauty we would not survive our pain, our sorrow, and our suffering.
And in the world I lived in, the world he lived in, a secret world within the world, a world of of constant crime and cruel, cold, death, there was almost nothing but suffering.

“You may not be beautiful the way you were before,” I whispered, cupping his ruined cheek. “But you’re still beautiful. To me.” 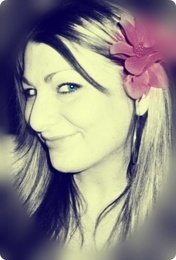 Madeline Sheehan, a Social Distortion enthusiast and devoted fan of body art, has been writing books since she was seven years old. She is the author of The Holy Trinity ebook trilogy and Best Selling Novel, Undeniable.  Homegrown in Buffalo, New York, Madeline resides there with her husband and son.

“I’m half out of my mind in love with life. The good, the bad, the laughter and tears, it’s all worth it just to see another day.”

UNDENIABLE, the first book in this series, was one of our BEST READS of 2012 and today we are giving away two ebook copies of the book.  International.

And you do realize our HEARTBREAKER giveaway is still going on and you can enter to win a SIGNED copy of UNDENIABLE as well?  Click here for that

I haven’t read Undeniable, but it’s on my wishlist right now! Thanks for the mention : )

I’ve not read Undeniable yet but it’s on my TBR pile.

This is going to the tbr pile. Thank you for the giveaway chance. 🙂

I was just recommended Undeniable at Goodreads as a book my friends think I would enjoy. I hope I win.

This is a new series for me, but I’m looking forward to reading them!

Sounds fantastic! Thanks for sharing 🙂

this series sounds absolutely wonderful, I love the name Ripper <3

thanks for the interview!…

Francesca, you are not the only impatient sweet butt around. 🙂

Otherwise, a brilliant post about a book that cannot get here soon enough.

One of his girls, meaning…his bike. 😉

I loved the 1st book! This interview was so great and fun to read. sdylion(at)gmail(dot)com

Sounds right up my alley!!

I absolutely LOVED Undeniable and cannot wait for this release! Thanks for the great interview.

Fab to meet you Ripper!

Haven’t read yours yet Madeleine but so hope to change that soon! The title itself too grew my interest to want to know Danny and Ripper’s story. Very unique title and awesome peek with the except.

Thanks for the post and the giveaway. I enjoyed the interview, especially the beautiful quote.
lisagk (at) yahoo

Under the Covers Book Blog
Author
Reply to  Amanda C.

I devoured Undeniable in one sitting late last year after reading Francesca’s review…absolutely loved it!

Yayyy so glad you did!

Loved hearing from Ripper! Loved Undeniable & can’t wait for this one!

I loved Undeniable and can’t wait for this one! 🙂 Thank you for the interview and giveaway! 🙂

I haven’t read Undeniable yet but it’s on my TBR list. Thanks for the interview and giveaway.

I am so ready for this book to be released. The interview cracked me up, what a great way to wake up, coffee and Ripper.

I have to say I was surfing the net for new books when I stumbled onto undeniable and bought the book with in 5minutes of reading the expert and I feel in love. I cant wait until Reaper comes out…
ttantonelli@aol.com

Can’t wait to read this book!!

I cannot wait until Unbeautifully is released! I LOVE…LOVE…LOVE Madeline, Ive had a chance to meet her in person and she is most definitley as cool and sweet as you can imagine. She rocks!

Undeniable rocked my world! This book is f’in awesome!!!!!!

another one I want to read, the pile is getting huge!

I have them on my wishlist! I seriously need to get Undeniable like now!

OMGoodness I love the cover 🙂

Think he loves that bike of his almost as much as he does Danny!!!

Can’t wait for Unbeautifully to be released!!
Thanks for a great interview and giveaway!! 😀

Love this, =) can´t wait for my chance to read more!
//Linda

A revealing interview – loved it.

Love the interview! Thanks for the giveaway!

I’ve not read Undeniable yet but it’s on my TBR pile.
Love the interview! Thanks for the giveaway!

I can’t wait to read Unbeautifully.

I enjoyed the interview

i wan to read unbeautifully so much….

Love, love, love Undeniable! Have been waiting impatiently for Unbeautifully and after that interview with Ripper I can’t stand the wait any longer!!! xoxox ♥ Lorie